Since I had the day off work today, I intended to spend it lazing around the house and just goofing off. I figured I’d maybe get a little bit of writing in, but otherwise, I just planned on reading and randomly spider monkeying the brother unit just to keep him on his toes. (You guys think I’m playing or trying to be cute. I’m not. I actually do this all the time. He hates it. :-D)

I ended up relaxing for all of about an hour and then, after about 15 minutes of twitching, jumping up and writing like a demon – enough to finish Amore’s rough draft! Now all I have to do is the red, yellow, and green revisions, then shoot it out to my Beta Reader Hit Squad. The story ended up taking a different turn than I intended, but it’s better because of it. And, after some bloody trimming, I even managed to get it down to 10,000(ish) words! I’m very excited about you guys reading it…of course, the only way you’ll actually get to is by buying the upcoming Bad Girls of Erotica anthology – which I’ll keep you up to date on in the pages of this diary.

This took about three hours mind you, so afterward I figured I’d just laze around for the rest of the day.

Anne wanted to go run errands and since I wasn’t working would I mind keeping her company and going with her??

So, we ran errands, I ended up spending way too much money (I really wanted that oil diffuser and oils at Walgreens, even though it set me back $80. And I really wanted to try this new place that I thought was a burger joint, but ended up being all about chicken – and I’m not a huge fan of chicken. I ended up giving most of it to Anne.)

I ended up sliding home, spider monkeying my brother for good measure, then doing a miniature workout and jumping in the shower. Which I just got out of. Like, 10 minutes ago.

So. It’s been a hell of a relaxing Tuesday!

Anne and I are about to watch a few episodes of Ouran High School Host Club on Netflix (our current series) and I’m hitting the bed early. 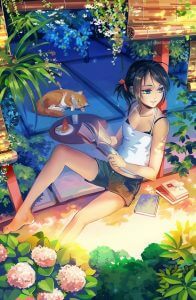 “Sex is a part of nature. I go along with nature.”

Posted in Diary
← Exhausted.Return of the Pop Tart! →