I have no idea how to start this diary entry. I mean, my day was pretty basic: I slept in, finished the red revision of “Amore,” and cried tears of pain and anguish as I trimmed it down to try and make the 10,000-word limit for the anthology. There were pools of blood around my feet when I was editing, I swear. All that agonizing, trimming, and cutting scenes I really wanted to be there and…

Back to the cutting block tomorrow when I do the Yellow Revision.

Time for a disclaimer: while the version released in the anthology will be beautiful, but it won’t be the complete story. There’s so much I have to chop out it kind of feels more like a trailer. But that’s OK because when it’s finished, I’m going to go back and expand the shit out of it for public release, adding in everything I had to chop out. Like a director’s cut.

It just now dawned on me that you guys don’t even know what this book is about! Maybe the current synopsis (I say current because it will most likely be tweaked/changed/polished before the anthology release) can help with that…

What good is fame if you’re slowly, unavoidably, and undeniably losing your mind?

Alicia is an up and coming model and internet sensation with an insane work ethic. What her fans don’t know, however, is that her always on personality is fueled by not only addiction but loss and tragedy on almost every level of the spectrum. The more famous she becomes, it seems, the more she loses.

Her husband was first.

And then her newborn daughter was ripped from her arms.

No one knows that Alicia is unraveling. No one but one girl; one girl who will do everything she can to be Alicia’s salvation.

Even though being her salvation literally means her death…

I’m genuinely in love with this story, for so many reasons. It has some seriously hot sex scenes, yes, but it is not your average erotica book. Like I’ve said before, and it still holds true: I can’t seem to write a standard fuck book to save my life! My mind is just not wired that way. I would get bored quick doing that. Maybe I would sell more, but I don’t write to get rich. I write because I have no other choice.

Anyway, I made my absolute last Black Friday purchase today: Grammarly’s professional version. It hurt, but it is so useful. The free version is nice, but the pro version…so much better.

Before I close this entry, I want to take a quick second and thank everyone who is buying my eBooks, audiobooks, and paperbacks during Black Friday. Money is precious, I know (even though I don’t act like I know sometimes) and that you spend some of it to buy my products…is touching. And I really mean that. I love you all. Thank you. 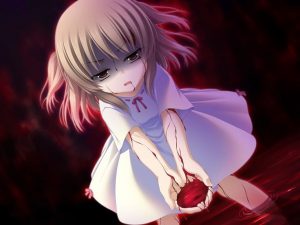 “In 1985, I was living with my sister in Virginia, and since I was still in high school, I worked at McDonald’s to save money to get an abortion. It sounds really terrible, but it was the best decision I ever made. It was the first time I took responsibility for my actions. I messed up, had sex without contraception, and got pregnant at 15.”
– Kathleen Hanna