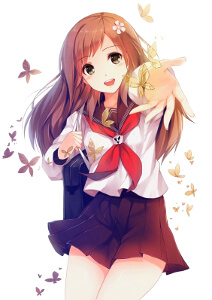 My big brother convinced me I blew my nostril off when I was younger. We were playing video games on his Sega Genesis (I think I was whipping him at Mortal Kombat) and I started sneezing uncontrollably. After a particularly powerful sneeze, he looked at me, dropped his controller, and made this mock terrified sound and started manically looking around on the floor.

He startled me so much that I quit sneezing and asked him what he was doing (after pausing the game so he couldn’t use this as an excuse). It was then he informed me that I sneezed so hard that last time that my nostril flew off. I panicked and dropped to the floor, trying to find it, and when I couldn’t, I went running to find my mother to get her to help me look for it.

My brother had to stand in the corner for an entire half hour as punishment.

Roughly five minutes later I was in the opposite corner for throwing toys at his head. 😁

He got me back shortly after though: we were playing hide and go seek, and I hid in the washer. He found me quickly (I was giggling) but didn’t let me know, and nearly gave me a heart attack by turning the damn thing on for several seconds.

I got him back later that week by framing him for murder though. When our parents came home from work I was in the kitchen, ketchup smeared on my body and butcher knife stuck in between my armpit and arm. He was supposed to be babysitting me but was playing video games in his room instead. My mom freaked, but my father instantly saw through it. I was grounded for a week.

I don’t know why, but memories have been flooding my mind today, and since my brother has been out all day I can’t reminisce with him – so you guys get stuck with it. 😁