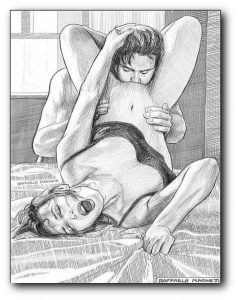 I went to bed last night and was so restless that I probably resembled a fidget spinner as I twirled around on my bed, flipping through position after position trying to get comfortable. I was all over that motherfucker. Luckily, I was in bed alone. Otherwise, someone would have ended up on the floor. 😅 It was obvious to me after an hour that I wasn’t going to be able to go to sleep, so I decided to be productive and use my insomnia to my advantage.

So, I slithered my naked ass (naked comment inserted exclusively for Selina 😏) over to the computer, briefly browsed through my task list for the day, and then proceeded to merc the shit out of everything on it. Long story short? By 6AM, everything I had planned to do throughout the day was complete.

Highlights: I finished flushing out my account on LibraryThing, completed the rough draft of Voyeur: Season 1 Episode 5 (Though honestly, I’m not happy with it yet. But then, it is a rough draft.), finally triumphed over Amazon in the battle over the paperback cover of When Daddy Was Away, and completely finished and compiled Interview With A Werewolf, which will be released September 1st (Unless you happen to be Ronnie, the VIP Patreon who requested the story. He has it in his hands now. 😜)

And then fielded an interesting question that gave me a bit of a pause on Facebook. A reader messaged me telling me she was a fan of mine (I really hate that word) and was shocked when I responded and even talked to her for a bit. She said she had written to other celebrities in the past (I quickly corrected her. I am not a celebrity! 😅) and never received a response from any of them.

The question she asked me was why I was so receptive and responsive to people.

My knee-jerk answer was something akin to “Why wouldn’t I be?” but I stopped and decided to think a bit deeper before I responded. After contemplating for a bit, I replied:

“Because we have a society built on idolization, and it shouldn’t be. We’re all humans. Celebrity is a man-made concept, and as such has little intrinsic value. Basically, I’m approachable because I truly believe that I’m no one special – I’m just someone who loves to write. Period. The last thing I want is someone looking up to me or turning me into some sort of metahuman. Be your own role-model. If I’m not part of the solution, I’m indubitably part of the problem, ya know? 😊”

She apparently liked my answer. I’m glad. It was the truth.

I’ll see all of you in the morning.

Thank you for reading. 💖

When Leo Tolstoy and his brother were children, they created a club with a peculiar, almost impossible initiation ceremony. In order to become a member, one had to stand in a corner for a half an hour and not think of anything white.

FacebookTwitterPinterestRedditEmailWhatsAppSMS
Posted in Diary and tagged Amazon, Interview With A Werewolf, LibraryThing, patreon, Selina, Voyeur, When Daddy Was Away
← Beautiful disasterPimping ain’t easy →