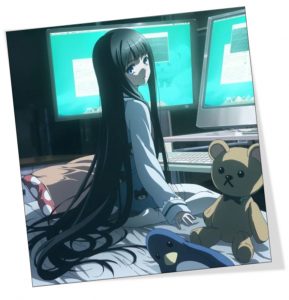 It feels so good to be back, motherfuckers! 🤗 God this has been a long, painful, educational few weeks. I’ve been staying away from social media for the most part because I’ve just been feeling icky, and I don’t like doing anything half-hearted, so I figured it was better to heal completely and hit everything full-force than weakly limp into the fray.

Not that I’m entirely 100%, but I’m not far from it. The only thing wrong with me is the right side of my face still not moving – otherwise, I’m perfect. Which is why I started working at around 11:30 PM last night. Well, that and Anne couldn’t sleep, and I’d slept so much during the day (healing) that either could I.

See, I had a brief migraine relapse, but this time I attacked it head-on: lights off, sleep, hours of whining, and medicine. It was gone several hours later. 🤘

When I finally gave up on sleep I hit the ground running: wrote a stunning amount of verbiage (remember that domestic violence book I was writing? Done.), hired several narrators for a handful of upcoming audiobooks, mailed off some autographed books for Patreon members, did a ridiculous amount of grocery shopping (it was so hot outside Anne started cussing me out in chicken! 😅), ironed out the last few details of my big brother’s birthday party with his ex (long story), and started using this app/website MyNetDiary to monitor my health. I’m on the trial version right now, but I may subscribe to the monthly version if it proves really useful. I also plan on going to the doctor soon for a follow-up just to make sure everything is working the way it should; I’ll let you guys know how that goes.

For now, though, I have to run – it’s my big brothers birthday, so I have some mischief to manage.

As always, thank you for reading.

FacebookTwitterPinterestRedditEmailWhatsAppSMS
Posted in Diary
← All over the place…The ghost in my room, and why my brother is an asshole… →