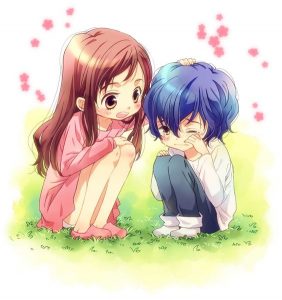 Someone was murdered about a hundred yards away from us. I was sleeping at Anne’s (it was daytime – I did tell you guys I’m a vampire now, right?) and when I woke up to go take out the trash some guy was leaning against the wall and told me the whole story. Apparently, a young Latino dude was shot by the police trying to sell some drugs. He pointed to the crime scene – which was all taped off – and, sure enough, it was swarming with law enforcement. He told me he was surprised I was able to sleep through it, as there were gunshots and everything. 😳

It took me a while before I found my voice.

Really, this has been a weird week in general. It seemed that Anne and I had to run errand after errand, butchering my writing time down to half, and when I did have time to write I was in such a weird mental place that I didn’t want to.

And then something happened when I was with Anne to get her state ID renewed that caused me to put things in perspective a bit.

An older white woman was talking to her friend and walking without really paying attention to where she was going and almost ran into a nicely dressed young Hispanic man. She stopped abruptly and looked him up and down with a look of obvious disgust, and then told him – verbatim – “You’re not a person.” And walked away.

You should have seen the look on that young man’s face.

I immediately went over and talked with him a bit, though I really wanted to catch that woman and slap her in the back of the head. I mean, what the fuck? What kind of a comment is that? It’s ridiculous on several levels, and the young man didn’t do anything to deserve her ignorant, hurtful, misdirected venom. He was just standing there, waiting for his girlfriend to get out of the bathroom (who was a sweetheart, by the way). When I apologized on her behalf he just kind of smiled and shrugged and told me he was used to it. He said that ever since Trump was elected, things like that have been happening to him more and more.

Funny thing was he was only half Hispanic and couldn’t even speak Spanish. He just looked full-blooded Mexican.

And that was enough for that woman to try and strip him of his humanity, I suppose.

After talking a bit more I rejoined Anne, who was waiting patiently for her number to be called, but my mind kept replaying not only her words but his as well. Our conversation put my problems in perspective, and when I got home later that day I turned all the lights off, flipped on my desk lamp, and slipped on my headphones. And then I wrote like my soul was about to explode.

It was refreshing, invigorating, and all the problems and angst I’ve been feeling this week just melted away. It reminded me of why I became a writer to begin with. It was therapeutic in more ways than one. It’s easy to get so riled up by the day to day drama that you forget your safe place, your happy place, and how important it is that you go there every once in a while, to keep from mentally melting down.

My problems are so insignificant compared to others, and I’m much more fortunate than most.

I should have written in my Diary more. 😅

Anyway, thank you for reading, my loves.

“I’d have a sex scene with Whoopi Goldberg or Star Jones.”

FacebookTwitterPinterestRedditEmailWhatsAppSMS
Posted in Diary
← Alexa: Vampire WenchWhat I’ve been up to lately →