I had a fantastic, uneventful day, full of laughter and good vibes. Seriously. It was the exact opposite of yesterday. I loved it.

Here’s how it went down.

I was on the way home from work and walked by a dead squirrel on my way to the bus. I almost got clipped by a car because I stopped and stared at it for too long. For some reason, I was just transfixed. The strange thing was it didn’t even look hurt; there were no visible signs of death; in fact, it really looked like it was just kind of sleeping. I found myself staring intently at its tiny lifeless body, not out of morbidity but pure fascination. Something about the way it was just lying there, its little eyes closed, its tiny body stiff.

I still don’t know why that dead squirrel captivated me so much. I’m sure I can come up with myriad psychological reasons, but the simplest truth is this: it simply did. It was a compulsion. I tend to listen to those because they exist for a reason, and more often than not I always benefit from heeding them.

Which is kind of the way I write.

People have asked me recently why I write the range of stories I do, and why I don’t just stick to a niche and possibly make exponentially more money. The answer to that question is the same as why I stopped and stared at that squirrel. There is no hard, fast, and logical reason – I simply feel pulled towards various kinds of stories, so I write them. Sometimes I want to write paranormal, so I do. Others, I feel like dark horror is the way to go. And then there’s romance. And, of course, straight smut. It all depends on my gut, on what my feelings are telling me to explore. There is no rhyme or reason to this. Which I guess makes me weird, but the ability to create world’s and characters in so many different genres is the main reason I love being a writer so much.

Maybe because of my writing wanderlust I will never be one of the most popular or top-selling authors out there, but I’m fine with that. That’s not why I write anyway.

Now on to abusing the shit out of my liver…and finishing up Killer Lolis – which a few of you will get an advanced copy of. 😉 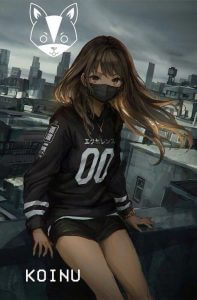 FacebookTwitterPinterestRedditEmailWhatsAppSMS
Posted in Diary
← A bummer of a dayI hate naps →