Today was an interesting collection of events.

Rebecca ripped me away from JC (my older brother) long enough to put me in a steaming hot bubble bath (probably as an apology for giving me a motherfucking POP TART for breakfast! :-D), and afterwards I wrote for hours on Amore (my first ever lesbian story, which I’m going to submit to the upcoming Bad Girls of Erotica anthology), which brought my word count up to 6,411. Only 3,589 words to go. I have to shorten the fuck out of my roadmap though, because I had so much more planned. When it’s released next year as its own story, it will contain much more freakiness and mindfucks. 😉

Before I hunkered down to write, I had an awesome conversation with a fellow erotica author about writing in general, part of which I’m sharing here. I’m only sharing my responses to her comments because I couldn’t get in touch with her in time to get permission to share her side of the conversation:

ME: “Some of the books I see in the newsletters I’m subscribed to I could never write. Stuff like “Knocked Up by the Neighbors Pit Bull”, “Raping Little Sister”, etc. HARDCORE stuff that makes me look like a Disney affiliate. 😶”

ME: “Honestly, I never look at what’s selling either. I just try to challenge myself as a writer. The Killer Lolis book was a big experiment for me, for example: it mixed the real world, anime, erotica, romance, and a twinge of darkness and mystery. This lesbian story I’m writing is not just lesbo sex, either: its…weird. You’ll see. Unless it’s a book in my Quickies series (and sometimes not even then), I can’t write normal fuck-books to save my life. There has to be something different, something scary for me as an author to keep my interest. I love being a writer, but I really couldn’t care less about becoming rich off it. I love my “fans” (I really hate that word) but at the end of the day, I’m pouring my soul onto the keyboard. The fact that people can connect with that, resonate with that, that…that is why I do what I do. 😊”

(On certain authors we mutually know – which I’m not naming – that chase sales by writing what’s popular at the moment. And that’s it)

ME: “I hate to see authors go down that path. Sale-chasing is not a good place. Mentally or emotionally. Funny thing is, if you write for yourself / listen to your inner muse / follow your passion, sales will naturally come. Because that will separate you from everyone else, make you stand apart from the sea of writers out there. ESPECIALLY the ones that chase sales. 😅”

ME: “For reals! I have a huge backlog of books to write, and some I’ve already written in a rough draft for that I don’t have the time to flush out! I need to get a writing squad together and start farming this shit out! #TeamAlexa 😋”

Oh, and to add extra sweetness to the day, Rebecca ran to the store while I was in the bath and brought back a fuck ton of sweets.

And now my tummy hurts. She is so freaking awesome.

I’m not letting her out of my sight again.

The only downside to the day is when my brother asked about his best friend – the guy that was driving the car he was in. That was not an easy conversation to have. He took it remarkably well. I think. See, he’s strange – he keeps things so internalized and compacted that it’s impossible to tell how he really feels at any given moment. Even for me, though most of the time I can figure him out. He has tells, you see. But today…well, he kept them well hidden.

That could be a good or a bad thing.

Anyway, Natalie (my brother’s fiancée and so-called about to be fired because bitch quit doing her job assistant) did show up a few hours ago, and her and my brother have been in his room ever since. If they get too quiet, I’ll turn on my spy cam I have set up in his room via my laptop, tablet, or smartphone.

Anyway, Rebecca and I are about to start watching The Lazarus Effect on Netflix. 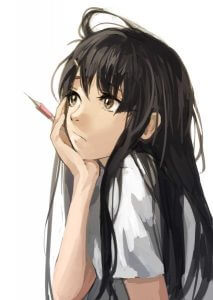 “Though the sex to which I belong is considered weak you will nevertheless find me a rock that bends to no wind.”
– Elizabeth I