It has been a long time since I couldn’t go to sleep at night. By the end of the day, I’m usually so spent that I’m asleep almost before my head hits the bed.

But not last night.

Last night I tossed and turned, restless and agitated, unable to simply turn my mind off and relax. I kept thinking of story elements for Girl Fight, then Deep THOT, then my big brother’s universe that I’m about to be writing in…

I did finally get to sleep though. For a little while.

And was plagued with nightmares.

I don’t remember all of them, but I definitely remember the last one: my big brother J.C. was still in a coma, except this time, he didn’t wake up.

I woke up in a panic, and even though I knew it was just a dream, I badly wanted to be next to him, to have proof of life. I laid there and tried to calm myself, tried to rationalize my fears, but they wouldn’t go away. I found myself wondering if there was a legitimate reason for this, like my subconscious trying to tell me something. Was this the famed female intuition that had thus far managed to elude me all my life? Was something really wrong with him?

So, I got dressed, crept down the hallway, and opened the door to his room. He was in bed, and he appeared to be sleeping. I crept closer. It was hard to see him in the dark, but it looked like he was still breathing. So, I did what any rational adult would have done: I crawled in bed with him and cuddled until I fell asleep.

And that’s precisely where I woke up this morning.

He asked why I was sleeping in his bed, of course, and when I told him he just held me, and I swear I cried right then and there without even knowing why.

I hate being a girl sometimes.

My mind hasn’t been right all day because of my night, so much so that I couldn’t even bring myself to write. I just had zero desire to do so.

I finally gave up trying and ran some mundane errands like grocery shopping, and cleaning up the house. I hung out with the bestie for a while too, which is something I need to start doing more often…

Thanks for listening. Having an outlet for my angst is nice. 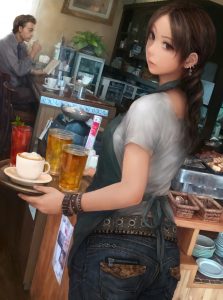 “The information encoded in your DNA determines your unique biological characteristics, such as sex, eye color, age and Social Security number.”