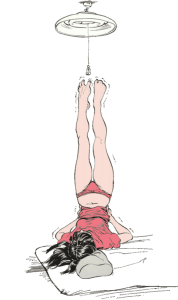 It’s been quite a day today, dear Diary. There are so many interesting and strange things I could write about, but to do so would take far more time than I have – and would also cause me to have to articulate things that I really don’t want to think about.

On the top of the list of good things is the release of the Bad Girls of Erotica Anthology No Boys Allowed, which of course I’m super happy about. Not only is it the only place you can read my one and only lesbian love story Amore, but it’s also packed with excellent stories of girly goodness by some of the most creative authors in the erotica game. If you’re a fan of lesbian erotica (and who isn’t?!), this book is a must-have. Seriously. Get it. Now.

On the top of the list of bad things is something you’ve most likely already heard about: the death of Net Neutrality. This scares me for so many reasons, and it should you, too. Unsure of exactly what this means, or why you should be scared? Check out this excellent article from Business Insider. Now, keep in mind that I always try to stay out of politics, because I don’t think public figures should use there influence to change or sway the thoughts/inclinations of others, but damn. This is a big deal. A huge deal.

Now, some of you have asked me in the past why I try and stay out of politics. The answer is simple and complex at the same time: it’s basically using the whole celebrity thing as a weapon against the very people that made them that way. Like the countless commercials you see where celebrities endorse something utterly unrelated to who they are or what they are famous for, like an ex-football player trying to sell you car insurance or something. It’s just wrong, weaponizing your popularity like that…

Now before anyone tries to argue with me, don’t bother. My thoughts and beliefs are my own, and I refuse to debate over them. If you agree, that’s fine. If you disagree, that’s fine too. Just make sure it’s what you think, and not the opinion of someone else using you as a mouthpiece. You’d be surprised how often that happens without people even realizing it.

Anyway, on an entirely separate topic, I finished the rough draft of Girl Fight, but I ended up with a handful of really game-changing additions I wanted to insert into the story after the fact. I’ll inject them during my Red Revision tomorrow. I can’t wait.

That’s all for now. Anne and I have about 10 more episodes of Diners, Drive-Ins and Dives to watch before we conk out; we’ve kind of been binge-watching the hell out of it this past week.

“Remember, sex is like a Chinese dinner. It ain’t over ’til you both get your cookie.”
– Alec Baldwin

FacebookTwitterPinterestRedditEmailWhatsAppSMS
Posted in Diary
← Girl Fight cover reveal!Sleep is for the weak… →