As the official erotica sponsor of the Dallas Cowboys (come at me, lawyers!), I just wanted to say how excited I am about tomorrow’s game against the Seattle Seahawks. After hours of badgering, one thirty-minute-long spider monkey, and two won games of rock, paper, scissors, my big brother finally agreed to go with me to Anne’s place so we can watch it there. I have everything ready to go, too. No alcohol (that was last night), but basically an entire 7-11 is organized and prepared to put into my cooler.

I’ll try and stay off social media during the game, but I’m not making any promises.

As far as my day goes…it can be distilled down to three elements: spending hours writing Girl Fight (still in the yellow edit!), finishing the book God is Santa Claus for Grownups (see the review below) and playing Breath of the Wild on my Switch. I already beat it a while back, but I didn’t unlock all the memories or find all the shrines. Etc. So I’m going through and finding everything, then beating it again, then putting it up forever. I think my next Switch game will probably be Super Mario Odyssey unless they come out of nowhere with an Animal Crossing game for it.

Which they probably won’t, since they have that damn Pocket Camp game on phones now. But that’s OK. I’m still in love with my 2DS XL version, New Leaf. It’s a fantastic game! Maybe I should start sending friend codes to some of my readers…

Anyway, I want to get some more writing done before I call it a day, so I’m cutting this entry short.

“I believe that sex is one of the most beautiful, natural, wholesome things that money can buy.”
– Steve Martin 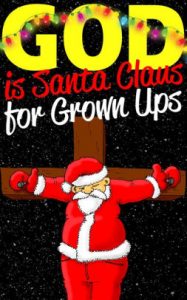 The author of this book needs to slap himself. Seriously. Why would you make a book…full of internet memes and nothing else? I agree with the message behind the majority of the memes (some come across as cheap shots against other religions, which I find not only a waste of time but also pointless), but still. I tried to link to the book on Amazon, but despite being on my Kindle I couldn’t find it, so I had to scrape Google to find the cover image for this review.
If any of you run across this book, keep in mind what you’re going to get. It’s amusing, yes…for the first five pages. Otherwise, it’s a book anyone could make.