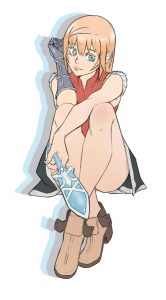 First of all, thank god the holidays are over. When you’re an author, sales usually swan dive during the last few months of the year, and even though November was reasonably typical, December was absolutely brutal. I thought Amazon’s reporting tool was broken at first until I researched the matter a bit and found out that a ton of other authors were going through the same thing, and had been in past years. Luckily the last few days of December up until today things have been quickly returning to normal.

I thought I was losing my touch for a second there. 🙂

Maybe I should explain that last part. 😀

See, my brother never – and I mean never – sleeps in. He’s always up at 6 AM sharp, weekday or weekend, work or no work, and buzzes around doing whatever needs to be done. Me, well…I get up at 6(ish), flop out of bed, slither my way to the bathroom, and groan and whine as I start reluctantly going through my daily task list.

Well, this morning I woke up a little before six and stopped mid-slither on my way to the bathroom and noticed the lights in the house were all off, no sound was coming from the kitchen, and the house seemed eerily quiet.

So, I did a U-turn (you know how hard that is to do when your slithering?!) and went to my brother’s room, my concern growing with every inch of ground I slithered across. I opened the door (cause, you know, fuck privacy) and found him sprawled in his bed (alone) lightly snoring. For the longest time, I just stood there and watched him, because seeing him sleep is almost like catching sight of a unicorn in the wild.

I almost running spider-monkeyed him to wake him up, but I figured if he was sleeping in he really needed it, so I ultimately decided to leave him alone.

Flash forward about an hour.

Natalie (my assistant, his fiancée) came over with a massive sack of stuff to make us a surprise breakfast and immediately noticed my brother’s absence. Once I caught her up to speed, she waddled over to his room (for some reason I followed) and crept into bed with him, leaning on her side and watching him doze. She pinched his nose shut, and he opened his mouth, not missing a beat. She lifted an eyelid up, let it close, then blew lightly on his face. Nothing.

I decided to join in on the fun. I got in my brother’s bed on the other side and gave him a wet-willy. He still didn’t wake up.

So, Natalie and I decided to start messing with his face, her doing her own thing on her side and me doing mine. After several seconds of this, his eyes fluttered open, and he looked at the both of us, bewildered. It was kind of scary at first (that boy has an evil looking bewildered face!), but then it became funny, and both Natalie and I started laughing, which caused my brother to crack a smile and roll his eyes. He stretched his massive-ass arms out and pulled both of us to him, and we all just kind of laid there for a while, snuggling, and didn’t say a word.

After a while, my brother broke the silence. He had to pee. 😀

Turns out the reason he slept in is that he was starting to come down with something last night and couldn’t get to sleep, so after several hours laying there miserable he gave up and took a dose of Nyquil. Since he’s completely straight-edge (drug-free), when he does take drugs they hit him hard. Amateur. I could snort a dose

If you’re still reading this, you deserve a reward. Here’s the deal: send me a private message via any of my social media accounts or on this page saying that you read today’s entry before I do tomorrows entry and I will respond to you with a code good for one free audiobook Monday morning. Any audiobook on Audible, regardless of author or price, can be yours. Free. Any audiobook. Just send me a message saying you read today’s entry before tomorrow’s entry. Simple, right?

“We are at a major epoch in human history, which is that we don’t need sex to recreate the race. You can have babies without sex. This is the first time in human history that has been true, and it means, for example, we could do some extraordinary things.”