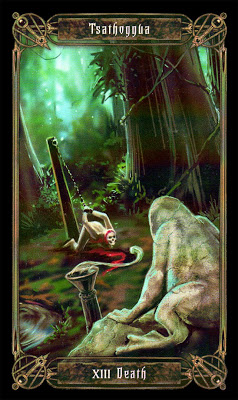 Something you might not know about me: I use tarot cards. Every morning at around 6AM I have a phone app send me a random tarot card, and often when I write I pull a card from my Necronomicon Tarot Deck for inspiration. It’s a deck I’ve had for over a decade, and I carry it everywhere. I love it. It was actually a gift from a friend of mine that passed away a few years ago, someone who was kind of my sister in the occult.

I miss her. So much.

Which is interesting, because my tarot card for the day was Death. Not that I was freaked when I saw it or anything because I know the card doesn’t represent actual physical death, but change. A more accurate definition:

Death (XIII) is the thirteenth trump or Major Arcana card in most traditional Tarot decks. It is used in Tarot, tarock and tarocchi games as well as in divination.

Depiction: The Death card usually depicts a skeleton, sometimes riding a horse but more often wielding a sickle. Surrounding it are dead and dying people from all classes, including kings, bishops and commoners.

Meaning: Unlikely that this card actually represents a physical death. Typically it implies an end, possibly of a relationship or interest, and therefore implies an increased sense of self-awareness.

The real reason this card was interesting is that no matter how many ways I tried to force myself I just had zero motivation to write today. It just didn’t feel right. I barely managed to finish the Yellow Revision of Interview With A Werewolf (if you want to read it, you can do so here: https://www.patreon.com/posts/17824615), instead choosing to study top erotica authors to see what I can learn. It’s something I’ve never really done, as I’ve always been more interested in just writing and not emulating, but it proved to be stimulating.

Natalie discovered the most thought-provoking thing, however: Soundcloud. After evaluating the site for a bit, I decided that instead of writing tomorrow I’ll be creating a Soundcloud account for my audiobook samples and then hopefully soon after getting my web dude to get them integrated into the website. I’m low-key excited about it, I’m not gonna lie. 😊

Just another step in my evolution as an author. I have a long way to go, I know, but I’m learning. I won’t be satisfied until my books consecutively hit #1. ✊

It all starts (and ends) with you, my readers.

Which is why I love you guys (and girls) so much, and I always reply to you, no matter how busy I get.

After all, you took time out of your life to reach out to me; It’s only right that I reciprocate.

“I do not believe in sex distinction in literature, law, politics, or trade – or that modesty and virtue are more becoming to women than to men, but wish we had more of it everywhere.”