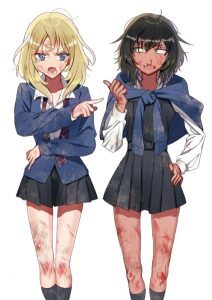 I’m not entirely recovered from Anne’s murder attempt yet (AKA the onslaught of malady that has been relentlessly attacking me these past few days), but I’m going absolutely crazy not doing anything creative so-

I caught up on all my tasks that had been building up (and they were legion) and worked on Voyeur Season 2 Episode 2 for several hours, then spent a ridiculous amount of time spot-cleaning the house and mapping out upgrades to my Patreon (and posting a picture of me wearing my new Star Wars panties 😏). Everything considered, it was a fantastically productive day, which means tomorrow won’t be as insane as I thought it would be.

Now, about Anne trying to kill me.

It all started with a toothache.

I really need to go to the dentist, but I keep putting it off because, well, I hate dentists. Maybe hate is too light of a word. Antipathy? I dunno. Anyway, apparently I got a gum infection of some sort because my gums started hurting like all hell and I got the mother of all migraines, so Anne recommended Amoxicillin (which she had laying around) since it’s an antibiotic. So I took three 500mg pills roughly six hours apart.

My body apparently doesn’t like Amoxicillin, because I started to feel a weird numbness on the right side of my face by the end of the day, and the next morning it was completely numb and immovable. I did some research online and discovered that some people experience this as a side-effect of Amoxicillin if taken in high doses when you first start, especially if it isn’t needed or prescribed to you.

The good news: it annihilated my migraine.

The bad news: I can’t move the right side of my face.

Something you might not know about me: I clean my ears religiously. All the time. To the point where my doctors constantly tell me its unhealthy. They say a certain amount of earwax should be in my ear, that its healthy for it to be there, but I can’t help it. I feel disgusting if I have earwax. So I was cleaning it out the day half my face decided to quit working and apparently went too deep and…

I think I accidentally bruised or even ruptured my eardrum, because it hurts like all hell and the muscles following my right jawline are swollen.

And my right eye looks demonic since I can’t all the way close it to blink. Which has made showering fun. And I now eat like a cavewoman, as half of my mouth refuses to chew. 🙄

These past few days have sucked ovaries.

But sitting around doing nothing but healing is killing me, which is why I decided to treat today as a work day instead of a typical #ButtNakedSunday. And I’m glad I did. Maybe I’ll make up for it tomorrow and have a #ButtNakedMonday. 😅

These stories aren’t going to write themselves…