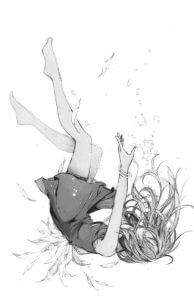 Taking an HIV test is something I had been putting off for my entire adult life, honestly because I was terrified of the result. And I don’t use the word terrified lightly. I was thinking that not knowing was somehow better than knowing, that maybe if I didn’t know the result it couldn’t kill me. Kind of like how a child imagines a mythical monster will be kept at bay by hiding under the blankets and covering their eyes. *

Irrational, I know. But ignorance is bliss, right?

Turns out, I don’t have HIV. Or any other STD. But the whole ordeal has taught me a major life lesson, one that I’ve already started applying to my day to day life: don’t ever back down from something just because it scares you. In fact, that is probably the best reason to tackle it head-on. I have no idea how I would have reacted if the results would have come back that I was positive, but…

But it’s all in there. By the end of the week it should be complete, and then I’m finally moving on to the next book in the Nephilim series proper: Prisoner. Once the entire series is finished and I take a vacation for a while I’m going to bundle every Nephilim book together in a collection, but that’s way in the future. So far in the future…

Because of having my head down and writing so much (upwards of twelve hours a day at times) my social media presence – and my personal life – has been a bit bleak. To be fair though, I did warn everyone this would happen while I finish up the Nephilim series (next time I plot out a five-book series someone please slap the fuck out of me) so they knew what to expect. When I do something like this I get a strange laser focus, a sort of tunnel vision, and very little else matters other than my goal.

Which means, of course, this is the exact time that Rebecca has decided to start slithering back into my life. 😭 More on that later.

I have words to smith.

And obstacles to tackle. Head on. 🤘

* This was never me. Back when I believed in monsters and such the last thing I wanted to do was be stationary and blind – I looked for weapons and hunted. 😅 I am not playing. I blame my big brother for this!

“I love that ‘Much Ado About Nothing,’ passionate, smart fighting. I love fighting with guys, and that’s something that I don’t get to see: arguing at a high level with a member of the opposite sex. That didn’t really happen that much on ‘The Office.’ I just like that ‘Moonlighting,’ Benedick-Beatrice type of thing.”