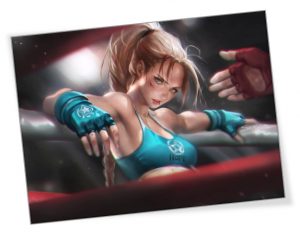 I talk a lot of shit for someone that’s only around 5’0”, 100lbs. Most of said shit talking was done during the Logan Paul VS KSI fight a few days ago, and the rest of it was when my big brother, his current wench, and Anne tried to pull me away from my computer to celebrate my birthday on the 23rd. Now don’t get me wrong, I love birthdays, but I love writing even more, and… well… let’s just say it wasn’t pretty.

And then there was the whole Logan Paul VS KSI fight. I was crunk yo, especially towards the first few rounds before Logan started tiring out. I was jumping up and down, yelling, kicking my shoes off and towards the end, I even threw the shirt I was wearing across the room. I completely forgot that I had a room full of people there (including my big brother, who was so into whatever he was doing on his tablet that he didn’t even notice 😳) but I didn’t care. I was wearing a sports bra, after all.

I still have a hard time digesting the fight coming out to be a draw. I was totally going for Logan (I honestly couldn’t care less for the rest of the fights), and while I admit he started tiring out towards the last half, KSI got in some illegal shots that should have been deducted from the scoring. I was not a happy camper.

Other than my birthday and the fight, the only thing that has been consuming my life as of late is Nephilim. I’ve written thousands upon thousands of words on Erotic Urban Legends: Broken Wings (A Nephilim Story) and Nephilim: Prisoner, as well as outlining the next Nephilim book after Prisoner, Slaughter. In fact, Broken Wings takes place in the middle of Slaughter, and details how a major character came to be in the story. When I first started writing it I only intended it to be a short 2,500-word story – currently, it sits at 10,971. And I still have a little more content to add. I even upped my daily writing time to at least seven hours a day just so I can get all this done in a timely manner.

Because once the Nephilim series is finished, it’s on to my next Killer Lolis book, which I’ve also already started drafting out.

I really, truly love being a writer. 🤗

Of course, that seven hours a day also includes the time I’ve spent writing things like Lesbian Cheerleader Zombie Ninjas from Venus and books under pen names, which I’ve done so I can take a brief break from the Nephilim universe, but most of that time is spent writing Nephilim related stories. Yes, I’m a hyper-focused extremist, but I love what I do. I’m not forcing myself to write this much – I’m simply giving in to my creative desires.

That being said, I do tend to supernova, meaning that I go through huge creative bursts and spill out a ton of verbiage, then kind of burn out for a few days while my creative energy replenishes. I know this will happen soon, but until it does, I’m going to enjoy this for as long as I can and get as much done as possible.

I’m also in the process of streamlining my newsletter (it got a little bit too busy) and working on other side projects, so maybe I do need to take a bit of a break. Anne keeps harassing me to play World of Final Fantasy with her (which she is completely dominating – she’s even passed me in it 😭) and I have a little, but nowhere near as much as she would like. And I need to keep her happy, otherwise she’ll start sabotaging my breakfasts (and she makes the best peanut butter wenchcakes* ever, so I can’t allow that to happen).

She actually wanted to talk to you guys a bit, so here’s her part of the entry:

“Me and Alexa waiting for Mom to come over to pick up her birthday present from us. Then we took a nap I am waiting for Alexa to awake. Yesterday I made the best taco last night. She loves my cooking. We been playing mess out world of  fantasy. I love these game. My mom she likes her watch we got her. Alexa show her how to use it. I think about going to get beer for us tonight. And play our game tonight. How is everything going with y’all?”

And there you have it.

A quick note before I go: I both love and appreciate you people; you could be doing anything right now, but you chose to read these words.

“You know, music is sex. It’s a sensual driving mode that affects people if it’s played a certain way.”