I want you to silence your mind for a moment. Clear out all your stress and worries, all your doubts and fears. We have a trip to take, you and me. But first, you need to wipe your conscious of the mundania that clutters it, that no doubt stagnates in it like a cesspool or quagmire of soul-killing manmade reality.

I’ll wait beside you patiently, watching you, soothing you. It’s hard, I know, but worth it. So very worth it. And on this trip I’m about to take you on, luggage (even – especially – the mental kind) is prohibited.

Are you ready yet?

That took longer than I thought, and we have places to go.

But what a place it is…

I move to stand in front of you. You see that I’m wearing a white summer dress, and my long red hair is bound snugly in a ponytail. I look you in the eyes and reach out, taking your hand in mine and gently squeezing it, reassuring you. You worry a bit, because you know that wherever it is I’m about to take you must warrant such reassurance.

I smile again, almost as if I can read your thoughts.

Which I can, of course.

I turn and keep your hand firmly in mine, making you follow me, and though you could probably resist my insistence, you don’t want to. You’re curious, after all.

And you know me.

I’m usually not the enigmatic type, but today I’m being uncharacteristically quiet and mysterious. I look back at you and smile, and my smile puts you at ease a bit.

But just a bit.

Within moments we arrive at a house. There are so many elements to it that its impossible to completely take in with one glance. Your mind demands to process every aspect of it individually, so you allow it to. It’s not like you have much of a choice.

The first thing your consciousness registers is the sheer size of it. It’s massive. More mansion than house, it only has two floors but looks as if it could be used as a hotel or a club.

I gently squeeze your hand.

When I finally speak you jump, because my voice has a different tinge to it than usual – a quality that is hard to pinpoint but impossible not to notice. Almost as someone is speaking with me, their voice just a pitch lower than mine and a tiny half second off.

It could merely be your imagination, of course.

It most likely is.

“What you’re looking at, my love, is The Lent Mansion. It is referred to in whispers by the locals as Death Mansion, and it has been vacant for nearly three decades. This has recently changed. Relatives of the original owner have returned to reclaim the property and hopefully scrub from it a long, sordid history that would chase away any ordinary, sane mortals.”

I smile at you, checking to see if you’re following me thus far. My smile widens as I see you are. I continue.

“It all started when the mansion was built in 1860 by Travis Lent on top of an Indian burial ground. Mr. Lent was a successful doctor who ended up committing suicide in 1904 after the youngest of his four sons, Trevor, died. A few years later, his wife succumbed to cancer. Then, in 1922, Mark Lent shot himself in the same room his father Travis Lent killed himself.”

Your eyes widen and you look at me. Why would I bring you to a place such as this? Why would I tell you this? I wink.

Have patience, dear reader. I’m not done quite yet.

“Shortly after the house was transformed into an asylum that housed a little over 250 patients when it opened in 1894. Fast forward to the 1950’s, when the facility reached its peak and had more than 2,400 patients living in overcrowded and inhumane conditions — some even kept in cages. In 1977 the asylum closed.”

I hold up a finger, stopping your questions. I still am not done. Almost, but not quite.

“Roughly 10 years later, descendants of Travis Lent, Jedediah and Angela Lent, were murdered, along with their four children and two friends who were spending the night. To this day the crime remains a mystery. Death Mansion has been universally accepted as one of, if not the, most haunted houses in the country.”

I look at you, curious as to how you are receiving the knowledge I imparted. I can see the questions in your eyes that your mouth has yet to speak: is all of this true? The house certainly looks the part. Even if it is all true, why would I tell you this?

“I’m telling you this, my love, because we are going in.”

You try to turn back. You can’t. My hand has a much stronger grip than you initially thought. For such a small, unassuming female, I’m strong. Immovably strong. You have no choice but to follow…

Do I have your attention? 😉

And then ideas started erupting in my head while I was bathing. Things like: Wouldn’t it be cool if maybe the stepmother was a little bit… off? And What if the reason she was off was that the house was haunted? And then Maybe the house is haunted because it has a horrific past! And then, of course, Maybe the stepbrother and stepsister wouldn’t just have a simple string of fuck sessions. Maybe he’ll be reluctant, and turn her down repeatedly, and she’ll want him in the worst way but can’t have him. Maybe their relationship will morph into a romantic one… etc.

Yeah, I have a twisted little mind. And things only got worse. My Patreon subscribers, who are privy to my entire writing process for every book I write (from outline to rough draft, then my various revisions) get to see all this up close, as I post everything once a week so they can comment on it and maybe give their suggestions/critiques on the way the story is going. So they already know how creatively chaotic my mind is, and how drastically my stories change as they progress.

So if any of them read this, they won’t be surprised at all.

I like the way it turned out, however. Hopefully you guys will too.

Here’s a sneak peek at the cover: 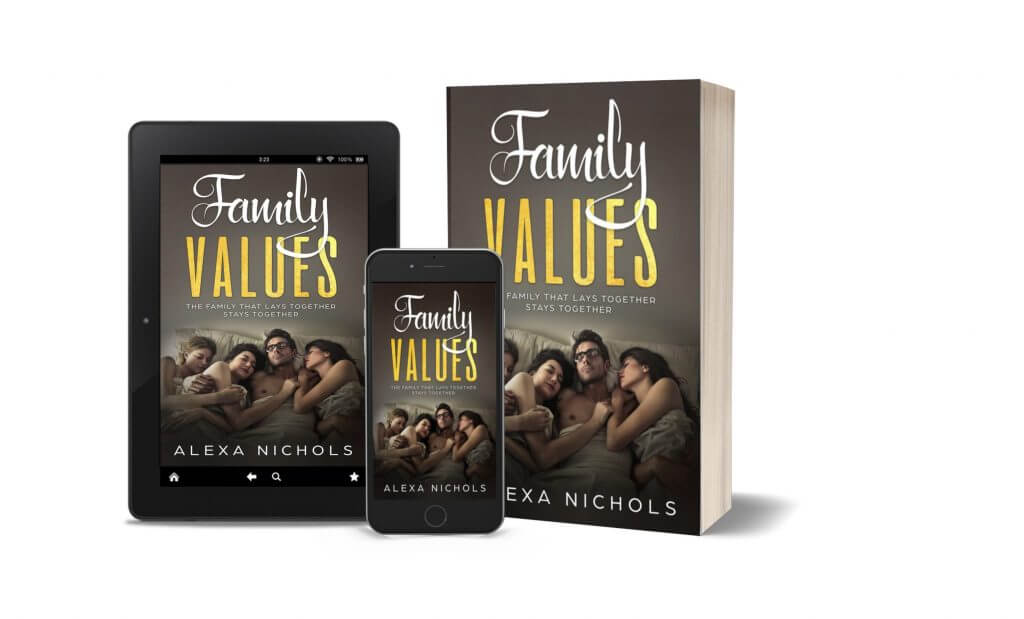 Which, of course, doesn’t go at all with how the story ended up. But fuck it. It was an enormous amount of fun to write, and at the end of the day, isn’t that all that truly matters?

“I’ve never had to pretend to be having sex with somebody. I’m like the queen of the foreplay dissolve.”