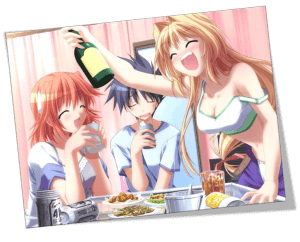 My big brother’s personality type could probably best be described as stoic. Dude has like zero sense of humor, and he rarely shows any emotion. He hardly makes expressions, seldom shows affection, and generally just tends to glower when he looks at you. Considering he’s big, muscled, and bald, this tends to intimidate people as soon as he steps in a room.

Which is why I literally choked on my Crackuccino® when he walked into the living room where Anne and I were lounging and proclaimed that he wanted to get white girl wasted. After I was able to breathe again, I asked him to repeat himself. He did. Anne and I practically flew off the couch to get alcohol. 😅

We had so much fun. And then afterward we went to a buffet (if you have never been to Golden Corral, you are seriously missing out) and ate like we were stoned. It was epic. When we finally made our way home we all just collapsed on the couch and stared at the TV, which was still off. Having an extreme hatred for silence, I decided to ask my brother what prompted his proclamation and subsequent buffet (we hadn’t been to a buffet in a long time, since I almost got into a fight with the manager at one). He looked at me and said, “Sometimes you just have to do something without reason.”

That made no sense to me, but I was happy with the end results, so I just cuddled into him and let it go.

Fast forward to the next day.

I had a ridiculous hangover. I was hating life, and all my life choices that led to me drinking like I didn’t believe in my liver. I decided then and there that my drinking days were over, that there is so much I could do with my life (and money!) if I weren’t drinking.

This vow lasted all of about three days. 😳

I usually have a will of steel when it comes to important things, but once the hangover completely cleared from my system and I was feeling like my usual, bouncy self, I began questioning why I wanted to quit drinking to begin with. Just because I felt terrible afterward? I felt disgusting after the buffet, but I never thought to swear off food. I enjoyed eating the food immensely while I was doing it, just like I enjoyed drinking. Why is alcohol something I should give up? I only drink on the weekends (and not even every weekend), and even then usually something around four or five beers. Or a 40 ounce. And that’s it.

Does that make me an alcoholic?

I don’t think it does.

So, I swan-dived off the wagon and decided to keep drinking, but in moderation like I already am. I feel much happier. I needs alcohol in my life. 😅

Shortly after my brother made his white girl wasted proclamation, I decided to take a vacation from the authoring world. I only recently came back from it. I think I can best sum up my mindset by ripping text from my newsletter (which went out late as fuck this month) instead of trying to find a way to creatively reword what was already written:

About midway through the month I kind of sat back in my writing chair and just watched as the smoke emanating from my brain slowly oozed out of my ears, occasionally blowing at it and smiling goofily as my bursts of air caused them to dance like ethereal snakes on opioids.

Minutes later I turned to Anne and announced that I was taking the rest of the month off.

I was quickly burning out, and I needed a vacation.

I rarely ever take time off (from writing, work, or anything else really), so a proclamation like that caused her to nearly drop her phone in disbelief. After she got over her initial shock, she shook her head and grinned in condescension. She didn’t believe me. She told me I was incapable of truly taking breaks, and that my past speaks volumes about my obsession with the written word.

Bitch was wrong: I shoved everything aside and turned into a metaphorical vegetable, catching up on all the gaming, reading, and binge-watching I’m normally deprived of because of my insane work ethic.

It was so worth it.

I’m back, fresh-minded, focused, and raring to go!

“I always hated high-school shows and high-school movies, because they were always about the cool kids. It was always about dating and sex, and all the popular kids, and the good-looking kids. And the nerds were super-nerdy cartoons, with tape on their glasses. I never saw ‘my people’ portrayed accurately.”