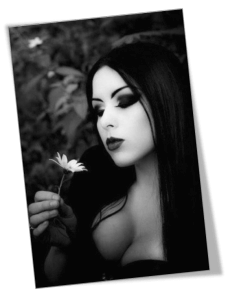 I’ve been working feverishly on finishing my seven-book Exitium Mundi series, which segues into my Nephilim pentalogy, and reality has mostly melted around me as a result. It’s an enormous amount of fun, but fuck am I ready for this series to be over with! I have so many other books I want (needs!) to write! 😅 Currently, I’m finishing up revisions on book six, and while I was butchering things one of the characters asked another a very pointed, profound question, which shook me so much I decided to post it on social media. The question was:

If one person – one person you knew, but didn’t care too much about – had to die so the people you love could live, would you consider murder?

The end results of this vote caused me to raise my eyebrows: 68% voted Yes, and 32% voted No (Anne voted no, which really surprised me). 68% Of people would actually kill someone.

This really made me think.

I’m used to putting my mind into my characters when I write, and it’s gotten to the point where doing so is kind of natural and effortless, but this question made me mentally stumble. It’s not a casual question. I value life. Death is a serious thing, and as Christopher Wallace (The Notorious B.I.G.) said on the end of Tupac Shakur’s song Runnin’ (Dying to Live) “I mean, even though we was going through our drama, I would never wish death on nobody, you know what I’m sayin’? Because there ain’t no coming back from that.” I wholeheartedly agree with him. Death is a serious thing, and too often we talk about it almost casually, like it’s the common cold or something.

Putting on my psychologist’s hat for a second: I completely understand why. Unless something affects us personally, it’s almost impossible to truly and fully empathize. It’s only natural – if we took everything to heart that we saw on the news, or read about, or heard about, we would go absolutely insane. Disassociation to a certain degree is basically just a matter of cognitive self-preservation. I get it.

I just don’t know if I have it in me to kill another person, though. Tase them (really appreciate those tasers, John! ❤), sure, find a way to incapacitate them, definitely, but kill? Murder? I don’t think I could. Maybe… I don’t know. There just has to be another way, you know? If it came down to it, perhaps I could. If it was the only way to save say, my brother, maybe I could. In the end the character I was writing about agreed to it, because it fit her personality and worldview, but damn. That was a hard decision to make.

I’m a member of a group called Writers Café, and since I joined people had been requesting I read/critique their works. Which I was cool with, of course, but eventually it got to the point where I was falling so far behind that my queue was up in the triple digits, so I had to disable read requests. This has me feeling absolutely crumby.

I’ve also had to trim down how much time I spend writing in my Diary, which I feel even worse about. I love writing in this thing, but by the time the days over my creativity is just drained. I feel mentally dead after seven-plus hours of writing plus another two to three hours of author tasks every day. When you toss in the time I spend responding to emails, messages on social media, and making content for my Patreon… the last thing I want to do is write about everything I did. This is why my entries have been so sporadic lately – I’m just tuckered out. I’m not about to quit writing entries though, because I love this damn thing way too much, but to write in it means I’m going to have to sacrifice time I would otherwise be spending on some other creative project – in this case, revising Exitium Mundi.

It’s worth it, though, because I always feel so much better after writing one of these damn things.

Why can’t there be more hours in the day?! 😭

Anyway, thanks for lending me your eyes.

I love all of you.

“Kids are all computer-savvy. Sit down and write to your parents on the computer. And just say, I have some questions and I’m scared. There’s some stuff I don’t know and I really need to talk to you about sex. Tear it off and put it on their pillow. They’ll read it.”