Many of you don’t know this (unless you’ve read my past entries or know me personally), but on Sundays I kind of hermit myself in my room and vegetate. I don’t (usually) go on social media or respond to any emails or messages, and the only person I acknowledge the existence of is my brother. I need that time to myself to kind of unwind and catch up on all the fun things I haven’t had time to do during the week. I love being an author, don’t get me wrong, but it is definitely a time-consuming, always-on kind of task.

Which is why Sundays are mine and mine alone.

I did do some author-related things, however. I cleaned up some of the people I’m following that aren’t following me back on Twitter and cleared away some of the spam (and suspected spam) accounts (something I’ll be doing every few days). If I unfollowed you and you are neither, let me know and I’ll follow you again ASAP.

I also finally finished the Green Edit of Killer Lolis! Which means tomorrow I’ll try and do the final bit of cleaning up and get it over to my Beta Reader Hit Squad®© to look over. While they’re reading it, I’ll be working on a brand new lesbian story (titled Amore) for an upcoming (and yet to be titled) Bad Girls of Erotica collection. One that they are going to let my graphics team do the cover for, whether they know it yet or not. 😀

I also updated one of my oldest books, The Secret Life of Miel, to a newer edition. It was approved fairly quickly by Amazon, so if you have any interest in paranormal erotica, grab yourself a fresh newly revised copy. 😉

I also caught up on some serious Animal Crossing: New Leaf playing, only to find my town in a state of absolute anarchy. People moved, weeds were everywhere, and my little animal nerds are mad at me for neglecting them. So, I paid to have the weeds picked, paid off the current town project, paid for an upgrade to my house (to keep the local loan shark Tom Nook happy), and sent all my little animal nerds letters containing presents. I’m pretty sure I’m getting re-elected next year. 😀

Other than writing, cleaning out Twitter, and playing Animal Crossing, my day was remarkably uneventful. It’s nice to have days like that sometimes. They’re good for the soul. 😊 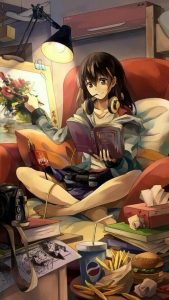 “Sex is the driving force on the planet. We should embrace it, not see it as the enemy.”