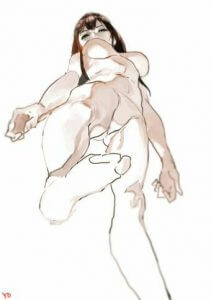 So, my besties house is haunted. Legit haunted. Like, shit “falling” off shelves, frequently creaking floors that sound exactly like someone walking around, and eerie sensations traveling down your spine at the most random times for seemingly no reason.

Now, this in and of itself does not bug me. I mean, I’m not ghost-racist or anything. It does piss me off, however: why can’t these motherfuckers use their energy more productively? Bring me a beer, or knock off an ATM and give me the money? You know, trivial things like that. I mean, why waste the energy to knock figurines off shelves when you can bring a beer to someone? It’s going to be one of the first things I teach my brothers spawn, trust me.

So, I’m still a prisoner here dog-sitting for my bestie until tomorrow, which means I haven’t had any real distractions short of online ones. Which means my productivity has gone through the roof. Cases in point: Voyeur: Season 1, Episode 4 is available for May 1st preorder, the first part of the audiobook version of  The Champion’s Gift: A Qedesha Story has been recorded and approved (and it sounds fucking amazing!), I sent the manuscripts to the narrators I hired for the audiobook versions of Girl Fight, Cramming Sis! Again!, and another book under a pen name that I can’t disclose here. Maybe on my Patreon. OK, definitely on my Patreon. I just scheduled it. 😜 Of course, you’ll have to be at least on the Patron tier to be able to see…

Speaking of Patreon: when I launch Patreon exclusive content, I’m going to start linking to it directly in a social media post to make it easier to find. I noticed that, since I post every day on that motherfucker, the paid-only posts seem to get buried, so I figured this would be an efficient way to combat that. A supporter can always just bookmark the link to look at later, but the thing is they’ll know its there. I’m starting to get this Patreon shit down!

Anyway, the first news story I saw today will also be the last thing I talk about: a man was gaming for 20 hours and tried to get up but discovered he couldn’t. True story. The article is here.

That’s all for now.

As always, my loves: thank you for reading. 🙂

“I like to behave in an extremely normal, wholesome manner for the most part in my daily life. Even if mentally I’m consumed with sick visions of violence, terror, sex and death.”

Posted in Diary
← Sleeping in, irresponsibility, and being hard to handleFinally, home! →