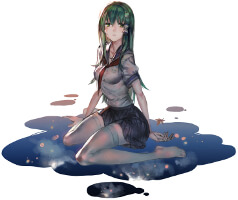 Anne and I apparently have abandonment issues. She went to her doctor’s appointment today to get the results of a blood test she took several weeks back (results: bougie-itis) and even though I usually go with her, I stayed behind so I could work on author stuff – mainly the fine-tuning of Good Girls Gone Bad. I felt terrible about not going with her, but I’ve been falling behind on so much these past few days due to Real Life… Anyway, while she was gone we bombed each other on Facebook Messenger, and I learned three very interesting things:

So, me being me, I did a little research. I found the following articles:

It seems I’m becoming more and more disenchanted with Facebook every day. I may just pull an Elon Musk and delete my Facebook altogether. I dunno.

Anyway, back down the rabbit hole I go!

The More You Know