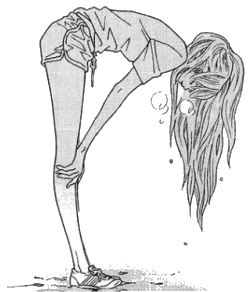 Imagine oatmeal. Freshly cooked, in a bowl, with nothing else added. Now imagine letting that oatmeal cool on the counter until it solidifies a bit, and then pick its bowl up and turn it over until it plops out all over the counter.

I spent the entire day today doing work for my erotica pen name (you Patreon motherfuckers know who I’m talking about), finishing up her latest story, setting up her email, and creating her Facebook, Twitter, and Google Plus accounts. And then programming advertisement posts for the entirety of next month in Buffer. I also revised/reuploaded all her books to include her new social media information, along with her catalog of books thus far. I wanted to upload a new book of hers, but my cover team isn’t finished with the cover for it yet, so…

Still. All this crap took just shy of nine hours.

My brain feels like mush. I hate the business side of writing with a passion, but it has to be done to sell books. It’s mind-numbing, but it’s definitely worth it.

To kind of wind down a bit, Anne and I ordered McDonald’s through UberEATS, and were pleasantly surprised to find that they forgot our straws, her Chicken McNuggets dipping sauces, and my entire fucking hamburger. Which is interesting, because the hamburger was, like, half the order. So we contacted UberEATS (who has excellent customer service, by the way) and they had McDonald’s redeliver the hamburger and dipping sauces.

They forgot the dipping sauces. 😳

I just said fuck it. It reminds me of the time several months ago when Anne ordered a chicken sandwich – and they forgot the chicken. Seriously. They had the entire sandwich made up, minus any kind of patty. It’s like, motherfuckers, you have one job…

My day has been nothing compared to my homiegirl Tara Babcock’s though. Do me a favor and stop by Tara Babcock’s Twitter page and show her some love. She’s going through a bunch of drama with YouTube right now, and I bet she would really appreciate the encouragement/support/dick pics. Tell her Alexa sent you. 😅

Anyway, tomorrow will probably be more of the same with the whole pen name thing, which means Monday I’ll be able to get back to actual writing. I can’t fucking wait…

According to sex researchers William Masters and Virginia Johnson, during orgasm, your body experiences a period of myotonia, or muscle spasms, due to the activation of vaginal muscles. This causes the muscles of your legs, arms, neck, abdomen, and face to contract while involuntary vaginal contractions occur at regular intervals.

Posted in Diary
← Why I should take a vacation. And why I’m not.Skyrim can now be played on – me?! →