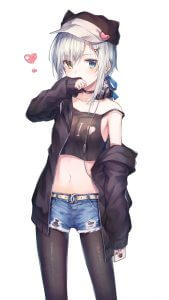 So, Anne’s vagina nearly killed me today. See, I was sitting at my writing station eating an orange, being the normal innocent halo-wearing angel I usually am. You know, editing erotica and watching adult videos for, uh, reference and stuff. And then out of nowhere Anne busts out with-

I choked on the orange slice I was chewing and had to spit it across the room to get it out of my throat. It was horrible.

You see, Pikachu is what she calls her, um, lady bits. 😅

That little life-threatening event pretty much sums up my month so far.

I have a ritual, see. On the first of the month I take care of over a dozen time-consuming author tasks, which usually take the entire day. Once they’re finished I’m pretty much set, which means I can spend the rest of the month doing what I really love: writing.

One of the things I do is place the next book in line up for preorder for three months in advance. This gives Amazon time to effectively advertise it and readers time to become aware of it before its official release. I also get the paperback produced (which takes far longer than I’m about to admit publicly) and hire a professional narrator for the audiobook version.

This month, Amazon decided to try and test my gangsta.

See, this should have been really simple. The book is simply a collection of three stories Amazon is already selling. But for some reason, they blocked it. I was baffled. I wrote customer support and received a form letter in response (which is not shocking). I wrote another email, trying to concisely explain the situation because I know almost everyone that works in the book division of Amazon customer service is outsourced/barely English-speaking individuals. I received the same form letter in response. So, I tried a different tactic: I called them. After speaking with the (barely English speaking) agent, she promised she would get it resolved on my behalf by contacting the appropriate channels and explaining the situation. The next day, I received the exact same form letter they had already sent me twice before.

So, the book is now available for March 1, 2020 preorder on Smashwords. 😭 Which also means there will be no audiobook version, and the paperback will be… interesting. If I can figure out a way to make a paperback version without using Amazon, I will. Otherwise, flip it.

I thought the insanity of the month was over. Finally, I could get back to writing the handful of books (Pulse, Paramnesia, Exitium Mundi, Nephilim 2) so I could take a much-needed mini-vacation. I mean, what else could happen, right?

In slides Patreon with a quick “Hold my beer.”

Apparently, they decided out of nowhere that some of my older posts violated their community guidelines, so I had to change or remove them so my account could be acceptable again. This took a little over a week of back-and-forth. I will say this, however: working with Patreon’s customer support is leagues better than Amazon’s. Patreon actually works with you, sending personalized emails until the problem is solved. And they don’t just ban your account or even place it in suspension – they work with you first. The only time they suspend your account is if you refuse to contact them… why can’t Amazon’s book publishing division be even half as good as Patreon? Anyway, after I removed a few posts, changed the header pictures on others, and heavily edit a few entries for being too lewd. (I know what you’re thinking: ALEXA? LEWD?! 😋) I was good to go. Now everything is hunky-dory.

Well, except for running seemingly endless errands this past week and Anne projectile vomiting like it’s an Olympic event (too much eggnog) this morning.

Hopefully, your month’s been better than mine…

“For the speedy reader paragraphs become a country the eye flies over looking for landmarks, reference points, airports, restrooms, passages of sex.”

FacebookTwitterPinterestRedditEmailWhatsAppSMS
Posted in Diary
← The world according to Anne, my writing playlists, and calling James Patterson out for a fightWho I did during my vacation…* →