I’m not going to lie: last month was a hard month for me. I took the latter part of it off, largely secluding myself from the real and digital world to cocoon myself with love and positivity, and when I came back from my glorious vacation… I was hit with all kinds of strangeness I usually don’t have to deal with. Online trolls. Losing someone I thought was my friend. Senseless death. Violence. Looting. Almost every single tweet and interview from our president. (🙄) I think the best word I can use to describe everything would be pandemonium.

I even tweeted about my mindset on my favorite social media network, Twitter: 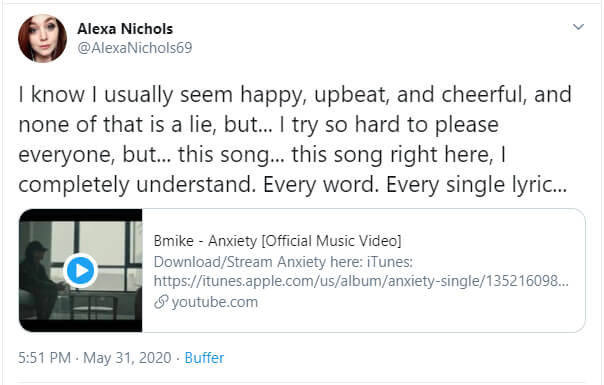 This was not me throwing in the towel, of course. I’m far too stubborn for all that. I was venting. I had to. More on why in a moment.

See, when all of this first started, I admit I was largely caught off-guard. I wasn’t fully prepared to maturely and intellectually process everything as it seemed to spontaneously manifest. In truth, that is one of the few ways someone can truly upset my equilibrium: by catching me completely off guard. That is harder than you may think, as my mind never seems to shut off (even when I’m trying to sleep), but most of this did.

And it pisses me off. For several reasons.

The first of which is because it ripped me out of my creative zone and made writing almost impossible. Writing is my therapy, you see, the way I vent all these chaotic emotions swirling around in my crazy little head so they don’t become toxic to not only myself but the people I care about the most.

And I found myself unable to do it. I tried. I really did. I sat down, put my headphones on, and tried to find my writing Zen, but… it just wouldn’t come. Day after day. No matter how hard I tried, it just would not come. It felt like trying to force yourself to go to sleep – you know you need it, you know it’s good for you, but you just can’t make it happen.

So I quit trying.

I calculated all the writing/author time I would typically do for the week (35 hours, in case you’re curious), set a countdown timer for it, and just kicked back and said fuck it and played around on social media. And watched some anime. And read. And ignored bedtimes. And, of course, played the hell out of Skyrim.

And then my eyes started drifting to my timer…

I figured, OK, let me just knock a few things out really quickly and I’ll get back to my fuck it vacation. So I turned on the countdown timer, knocked some things out… and then a few more things… and wrote some… and wrote some more… and knocked out tasks that weren’t even due yet… and played around with Patreon content… and wrote again…

And before I knew it, my time had all run out.

I guess there’s a lesson to be learned somewhere in there, but I dunno. I’m no teacher. Just a student. Always a student.

Hopefully, the month hasn’t been too bad for you, and you’ve managed to keep it together. This will all pass. It really will. You just have to hang in there. Or not: you can do like I did and just, you know, let go. Accept your feelings for what they are and just express them. Vent them out. And then see what happens. It may do you some good. I know it did for me.

“I really think that people’s right to happiness shouldn’t be dictated by some policymaker in Washington, D.C. I’ve come to know a lot of people that – sexual orientation is such where they’re in love with people from the same sex, and I just don’t think it’s our role in the government to say, ‘No you can’t be married.’”

FacebookTwitterPinterestRedditEmailWhatsAppSMS
Posted in Diary
← Don’t be a sea cucumber!Innocently being creepy and dancing like a drunk white girl having an epileptic seizure in a full body cast… →