You know, as I sat down to write this, something occurred to me: lately, a lot of my Diary entries have been about my life almost being snuffed. Hopefully this isn’t a dark foreboding or something. 😁😭 Anyway, continuing the tales of the attempts on my life, I have another culprit to add: pizza. It almost killed me.

Dead serious, if it weren’t for my Baby Squirrel, I’d likely be in the hospital…

See, I was typing away furiously at Devious Bitches (second revision! 🙌) when Anne forced me to quit working and eat something. If you know anything about me, you know how I hate stopping mid-project – I get mouthy, violent, and generally just murderous. However, I was hungry, so I decided to throw something in my stomach real quick and jump back on writing.

So I settled for one of those small microwavable pizzas, the kind with the hard foil bottom that makes the bottom of the pizza crisp when you nuke it. I had it on a small microwavable heavy glass plate and set it for the suggested time. When it was finished, I let it cool for a minute (as the instructions suggested), then opened the microwave to retrieve it.

Well, Anne asked me a question right before I grabbed the plate, so I stepped away to answer her, then stopped when I started hearing weird cracking sounds coming from the microwave.

I turned around, and the motherfucker exploded.

The plate the pizza was sitting on just… blew up. Shards went everywhere. Some even bounced off me. Had I grabbed it when I was going to, I would have been all messed up.

Life is strange like that, you know? Unexpected things can just happen in the blink of an eye that changes your life forever. And the biggest of these, the things that drastically change us, seem to happen when we are at our most unguarded, when we least expect it.

One of my friends informed me that this was gods way of sending me a message, of trying to illuminate me to the fragility of life. And to, apparently, scare me into believing in it.

She actually got mad when I laughed.

See, I’m not a Christian. Or any other religion. I’m not an atheist either. For the longest time I thought I was a nothing, but a close friend of mine came at me one day and informed me that he knew what I was: a Deist (because, you know, people just have to find a label for things otherwise they flip out).

I have to admit, the shoe fits. Succinctly, I believe we were created by something, but mankind has no idea what. I refer to my mindset as comfortably ignorant: I don’t know, and I’m perfectly fine with that.

You would be surprised at how many people are offended by my beliefs for some reason. Which baffles me – I mean, why do people care enough to get emotional over what I believe? Do these same people get emo when they discover that I don’t like a food they favor, or my sense of humor (yes on both counts I found out recently)? Or a political… never mind. People get offended by that too. 🙄 In fact, not only have I lost Patreon members recently because of my political viewpoints (I am not a fan of Trump) but friends as well.

This is why I tweeted the following: 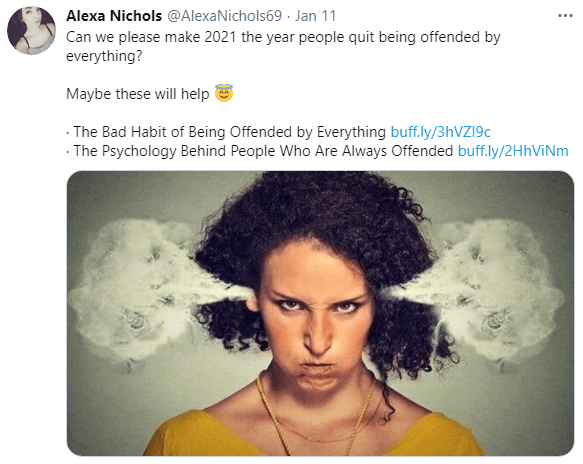 Now, if I could just get people to participate…

Anyway, sorry for the rant, but then this is my Diary entry after all. You knew what you were getting into when you clicked the link. 😁

“I made no resolutions for the new year. The habit of making plans, of criticizing, sanctioning and molding my life, is too much of a daily event for me.”

FacebookTwitterPinterestRedditEmailWhatsAppSMS
Posted in Diary
← My brother having a weak pullout game, Devious Bitches, and Beer-fi!Being disenchanted… and a devious bitch. →