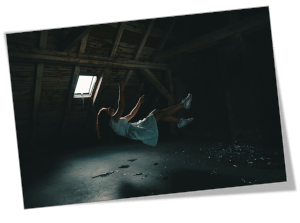 If you really know me, you know I have a barely existent immune system. I mean, it’s there, but sometimes it decides to go MIA for days on end. Probably out running the streets getting in trouble like I used to do when I was younger (i.e., pre-COVID). Anyway, yeah, I get sick easily, and when I get sick, I tend to stay sick forever. How I survived my first COVID shot with no symptoms is beyond me. I mean, if you were to look at my body, you would never guess, but inside this body… a whole other tale is being told.

Why am I writing all this?

For the past few months, I’ve been feeling a rattling mucus type of thing in my chest, primarily when I lay down, and it’s only getting worse. I’ve been coughing, hacking, and having difficulty sleeping because of it, and my breathing sounds like Darth Vader doing a mic check. I tried putting it off, hoping it would get better, but it, of course, didn’t. So I finally broke and went to the hospital a few days ago.

They placed an IV in my arm, took five shots vials of blood, did a barrage of tests with that blood, put me in a big scary looking machine for a CT scan, nearly killed me when I kept telling them I had to pee, which forced them to unhook me, and after all this… the doctor said they had no clue. He did say I have an enlarged heart, but he ruled out congestive heart failure (which was a relief, as the survival rate of that is 50% for five years).

So I waited. They ran more tests. Ruled more things out.

Many, many hours later, another doctor approached me and said she wanted to admit me, and in the morning she was putting me on a treadmill and if I passed that, she would send me home. There was an awkward silence as I looked at her like she was three kinds of stupid. I exercise every day except Sunday. Hard. I know I can do a fucking treadmill. Sleeping. It wasn’t going to show anything. I nicely explained this to her, and she gave me one of those strained smiles you give a child asking where babies come from. She explained that it was a basic stress test, but I didn’t understand why I had to spend the night just doing something like that, so I asked her if I could possibly do it today. For some reason, she looked at me like I was stupid, like why wouldn’t she want to spend the night in a hospital?! or something.

So went into full loli-diva mode and left against medical advice.

A stupid decision in hindsight, I know, because doctors are, you know, doctors. I am feeling better in my defense, but still, my body acting like that is a surefire sign that something is wrong. I know I need to go back. I don’t want to, because in a way I’m scared to learn what it might be, but…

Real Life, am I right?

Anyway, my writing life is going way better than my health. As I stated in my newsletter, I have a set release schedule of books, and everything is written up to 2024, so I’m able to take on these little side projects that I’ve wanted to tackle – things like pen name books, VIP tiered Patreon and Subscribestar.adult requests, and spider monkeying the hell out of my big brother. These are all important things, yo. My big brother gets moody and unbalanced if I don’t regularly spider monkey him.

Sigh. Back to work.

Some sexual dysfunctions can stem from how you feel about the appearance of your genitals.