Despite a bad case of out-of-nowhere insomnia last night (my brain enthusiastically woke me up at midnight like let’s do this shit!) I pretty much leaped out of bed and started authoring. It was beautiful. I’m almost completely finished with the re-write of Programming Sophia, came up with a lot of cool ideas for the clothing line that I tossed at my graphic designer, and jumped all over Amazon for…well…being Amazon. Not that they did anything bad (yet) this month, they’re just being super slow changing the cover for my new edition of When Daddy Was Away even though I received the email the day before yesterday saying my changes are live.

Nothing too big – just something I have to stay on top of.

And then I had to man-handle my homie-girls PayPal because it was being slow getting money to the company I took over, Kinky Literature, which almost resulted in a complete power outage over there. Luckily I got the money sent in time, so no one’s going hungry this month.

It’s hard being the boss! 😃

Anyway, tomorrow is a work day, so I anticipate very little writing (if any) getting done but then it’s the weekend – and I plan on completely finishing the rough draft of Programming Sophia during it. I’m super-excited about it. I can’t wait to let you guys read it! After my red edit, yellow edit, green edit, beta readers, and editor, of course. It’s not due out until July, so I have plenty of time… 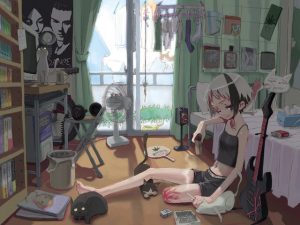