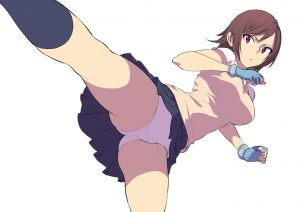 When I started writing erotica a little over a year ago, it was as a side-project to my regular writing. I’ve always had a bit of a freaky side, but I could never let that loose in my normal writing. See, I never saw erotica as a real genre. I basically only wrote erotica when I really started to get hot and bothered and I didn’t have a real-life physical outlet for my sexual release. I have two different pen names (which means I publish under three different author names) and erotica was always the bottom of the totem pole.

When that changed, I have no idea.

In a way, it kind of makes me feel like Sybil (aka Shirley Ardell Mason) because not only do I have to take on multiple personas when I write under different pen names, but I also have to produce drastically different stories with completely different grammar and plot designs. It’s a challenge, but a fun and stimulating one.

Why am I talking about all of this? Because this month is dedicated to one of those pen names, and I feel like an erotica author masquerading as something different when it used to be the other way around. It’s an interesting phenomenon, and I suspect it’s only going to get worse in time. I’m already catching myself going into full smut-mode when I write lovemaking scenes for some of my romances…

Speaking of catching myself.

I really, really try to keep myself from voicing opinions on politics or whatever current butthurtness the internet regularly comes up with, but I almost slipped several times today over the Logan Paul situation. You can click the link to read the full story, but to be concise: Rising YouTube star Logan Paul and his crew went to Japan and ventured into Aokigahara (also known as the Suicide Forest or Sea of Trees) and found a hanging dead body. This is not exactly uncommon. I’ve been there myself, though I didn’t stumble across any corpses. You’re supposed to follow a path through the forest, and Logan Paul definitely went off it.

The internet, of course, went absolutely apeshit, causing him to pull the video and upload a short apology vid in its place.

And of course, celebrities uncountable had to chime in and throw their righteous indignation out there.

I promise you in two or three days this will be completely forgotten about. And it should. If you watched the video he made (I did, and it’s still floating around the internet) you will understand why I’m rolling my eyes over all this.

Disclosure: I like Logan Paul. I don’t always agree with the things he says or does (hell, I don’t always agree with the things I say and do), but in general, I like him. He’s energetic, charismatic, and is inspiring with his work ethic and vision. Of course, he’s also only 22 years old and has been in the public eye (and movies/television shows) for several years now and has somehow managed to stay out of any significant controversy up until yesterday, so that does affect the way I see this incident. He’s not out there Justin Biebering.

My point? I seriously doubt he meant to hurt anyone’s feelings or traumatize the world. He just doesn’t seem like that kind of person. I may be wrong, but…watch the video and see for yourself. Unfortunately, most people on the internet tend to be lemmings, unable to think for themselves and following whatever influential person they can latch onto.

I encourage you to do your own thinking.

Have your own opinion.

You don’t have to agree with me – about anything (and I really couldn’t care less either way) – but if you do disagree, at least let it be because you disagree, not because some opinion happens to be popular at the moment.

And with that, I’m done ranting. I’m sure I’ll lose followers on various social media channels, but I don’t give a fuck. If they are that fickle, I don’t want them anyway. My real #Alexaliens will still be here in the morning.

And to them: I love you. And thank you. And good night…

“It’s not my style to either wear minimum clothes, to strip, or to even be comfortable with a sex-symbol label. I just want to do good work instead of sporting such meaningless tags. Sex sells, but to a small extent, not always. And this is what filmmakers have to accept.”
– Katrina Kaif