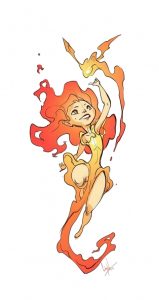 As far as Valentine’s Days go, this was probably one of my most interesting. It went nothing like I intended it to, and for that I’m glad: it turned out way better.

It started out innocently enough: Anne and I didn’t go to sleep last night, opting to play Skyrim instead. I ended up creating a new character named Alexa with red hair and light skin (shockingly creative, I know) and we basically started the game at the same time and did quests together. (That is after I had to restart without using some of the 300+ mods I have in the game – the beginning scene where your sitting in a carriage being taken to your execution was spinning all over the place on my screen, and when my character got out the game froze.)

So, I disabled some mods, restarted the game, and the introduction scene worked perfectly.

Then I saved, quit, and re-enabled my mods again cause mods=Life. 😀

Gaming side by side with someone is something I’ve never done before, and it proved to be a lot more fun than I thought it would. Not only that, but Anne ended up learning a lot about Skyrim, which was cool. We ended up playing for 11 straight hours, and by the time we finally put the controllers down we pretty much just passed out on the bed.

We were woken up by a sick girlfriend unit. Rebecca had been fighting the flu and finally lost, so she showed up at the door looking absolutely miserable (Still hot though. For the record). We ushered her in, popped her on the couch, and proceeded to make her as comfortable as possible.

Fast forward about an hour, and Anne and I were back to playing Skyrim while Rebecca was animatedly playing Super Mario Odyssey on my Switch. We ordered some chicken and cookies, talked smack to each other while we played, and generally just did nothing typical for Valentine’s Day.

And because of that, it was the best Valentine’s Day ever…

“I want people – especially young girls – to know that in life, nothing is going to be based on sex appeal. You’ve got to have something else to go with that.”