Because of my strange mental state, every task I’ve approached today (other than writing) I had to practically force myself to get through. I still haven’t finished everything because of this. Anne has been beautiful, giving me mental and emotional support and even cuddling with me when I just wanted to lay in bed and sulk. She also stopped me from thoroughly dismantling my laptop. I didn’t even have a reason to take it apart, I just wanted to.

Days like this are the downside of being a passionate person: I have really high highs and really low lows. I’m probably bipolar, I dunno, but I’m more high than low, so…

There was a bright side to my day though: 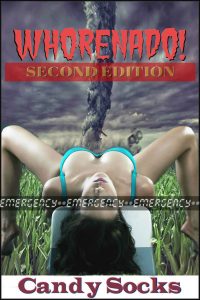 The moment I saw this book I busted out laughing, and it made me realize just how far outside the box I really need to go. I mean, I really need to step my game up if motherfuckers are putting out books like this. 😅 It looks like an awesome book, and I’m definitely getting myself a copy. You should too. I don’t know this author personally, but I’m willing to bet we would get along famously.

Anyway, that’s all for now.

I need to try and readjust my mindset because I can’t keep walking around all emo. Maybe I’ll savagely spider-monkey J.C. (my big brother) when he gets home. 🐵 Yeah, that sounds like a promising idea. He’ll never see it coming…

“I refuse the compliment that I think like a man, thought has no sex, one either thinks or one does not.”

FacebookTwitterPinterestRedditEmailWhatsAppSMS
Posted in Diary
← Stormy Daniels, Donald Trump, and Dark CarpathiansThe cost to be the boss! ✊ →