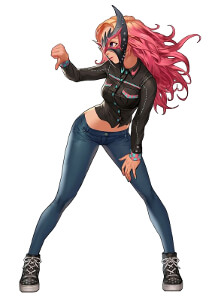 Life gets me wired up sometimes, like in a hostile come at me, bro! kind of way. There is so much I want to accomplish, but it seems like time just doesn’t give any fucks whatsoever. The more I want to do, the faster time seems to go, making the time I have allotted for each task just whiz by. Coffee doesn’t seem to help matters much; maybe I’ll develop a drug habit. I hear Hugh Hefner was using drugs when he started Playboy magazine. I’ll think about it. Any suggestions? 😅

Anyway, Interview With A Werewolf is finished and off to the Beta Reader Hit Squad, so as soon as they get it back to me, I’ll be queuing it for release. Motherfuckers on Patreon will get it ASAP, of course, but everyone else will have to wait until February of next year. My release schedule is just that full.

I’m writing my little ass off over here! 🙌

I also finished and uploaded the paperback version of Good Girls Gone Bad (which is officially available for July 1st preorder) and will hire a narrator for the audiobook version tomorrow; as soon as they approve the paperback, I’ll let you guys know. It looks slick. I’m really learning how to pimp the hell out of their paperback creation system. It’s all white, with a new picture of me—you’ll see. Soon. I’m also almost finished with Naughty Professor (you can read it’s rough draft here: https://www.patreon.com/posts/17955605) – tomorrow should be the day. It would have been done today, but I kept getting hit up with side tasks. I can’t complain though. One has to pay the cost to be the boss, right?

I just wish my girlfriend Rebecca understood this. She’s kind of going through a clingy stage at the moment, which generally I wouldn’t mind (and completely understand), but I’ve been so swamped with things lately that my free time has been whittled away to nearly zero. If this were any other time of the month, it would be different, but the first few days are always insane for me. I think sometime soon I’m going to just take a complete day off and take her out somewhere because she really deserves it for putting up with my bougie ass.

That’s all for now.

Thanks for reading, my loves…

💡 The More You Know…