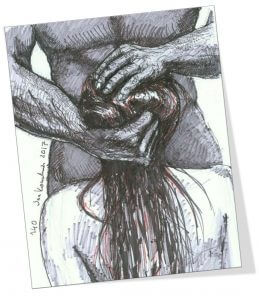 So, I have this book I’m writing, The Siren’s Song, about an orphan named Arielle that grew up with strange gifts. She lives in a small town very few people know about and is growing tired and frustrated with not only her loneliness but with her body’s unquenched yearnings.

She decides to use her abilities, her magic, to do something about it.

She was not expecting what resulted…

Here’s a little poem I made up and placed in the book that kind of neatly sums up her predicament:

As above and so below,

In peace of mind and perfect trust.

By power of three, so mote it be,

In perfect love and perfect lust.

The story is getting… intense. I started it out initially as a basic sexy story involving a siren and two men, but, well, you know me. I can’t write a basic fuck-book to save my life. I started adding tiny details here and there, and then conversations sprung up, and situations kind of just happened… and before you knew it, it somehow morphed into a supernatural romance between two jealous and conflicting brothers while I wasn’t looking.

And I’m not done.

I know I’m kind of getting ahead of myself, but I’m beginning to really like this Arielle chick and can easily see writing about her more when I finish the Nephilim series (which is what’s scheduled after I finish this story). The Siren’s Song should be completed within two to three days, after which I’m sending it off to my Beta Reader Hit Squad, and then I’m taking a brief break while they read it. During this time, I’ll probably organize and prepare my notes to dive back into the Nephilim universe, though I’m considering also knocking off the first episode of Voyeur’s season two first. But that’s it.

Of course, this means if you haven’t yet read Nephilim: Daybreak, you really should.

I cannot wait to write Nephilim: Prisoner. It’s haunting me. 👻

Hopefully, it will haunt you, too…

Female hyenas have clitorises that extend seven inches out of their bodies and serve as pseudopenises as well as the birth canal.

FacebookTwitterPinterestRedditEmailWhatsAppSMS
Posted in Diary and tagged Beta Reader Hit Squad, Nephilim: Daybreak, Nephilim: Prisoner, The Siren’s Song, Voyeur
← Lap dancing in public – or, how I almost got kicked out of a restaurant 😏Braindead →