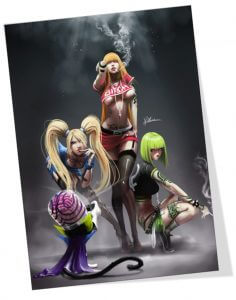 Such a strange day. Woke up at 3AM and couldn’t get back to sleep, so I decided to write – which I ended up doing for almost 12 hours. I completely outlined Voyeur Season 2 Episode 2, heavily dented three different projects under various pen names (you Patreon motherfuckers get ready) and submitted Interview With A Werewolf to Amazon for September 1st preorder. Once (if) Amazon approves it I’ll give you guys the link.

Professionally it was a productive day.

Personally, not so much. Maybe it was my lack of sleep, but I got into a screaming match with my big brother, and the sad part is I knew I was in the wrong even as I was in the middle of screaming, but I couldn’t just stop myself from being stupid because the momentum had been set and my mouth refused to quit moving. Have you ever had that happen to you? Honestly, I’m surprised he didn’t just slap me unconscious. I kind of deserved it.

And then I ended up getting into a fight with Anne several hours later that was again wholly my fault. It didn’t start out that way, but I sure accelerated the shit out of it and kept it going.

Sigh. I guess it was a diva day for me. I have them every once in a while. Fortunately, not very often.

My solution to this: get drunk, play a quest in Skyrim, and write some more. Cause fuck sleep. Anne’s at the store right now getting us beer as I write this.

You only live once, right?