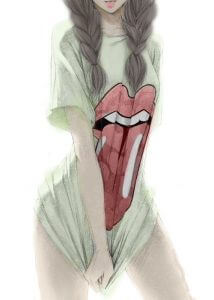 What do YOU do when people just stare at you in public? My big brother says I should just ignore them and do whatever it is I was doing before I noticed – or find something distracting to do to take my mind off their rapeyness.

He’s definitely the Yoda in the family, because I’m just a tad bit too fiery to sit there all meek and timid while a random motherfucker just ogles me.

Case in point: a few days ago.

I had some errands to run with Anne, and we were using public transportation (which we often do). I had my headphones in and was jamming away while I was getting work done and looked up… and saw this guy just unblinkingly staring at me.

Creepy, right? Happens more often than you might think.

Now, I wasn’t wearing anything overly provocative – just plain black sweatpants and a sweatshirt – and I definitely wasn’t exuding any kind of “come talk to me” vibe. I was working. And writing. And bombing Anne with random pictures of horse penises (because she hates that shit 😅).

My first reaction was to look away and try to ignore him.

My second was to question why that was my first reaction.

My third was to stare back at him just as intensely and unblinkingly as he was me.

So there we were, having a staring contest on the train, a contest I ultimately won. But not before he glared at me and shook his head, like I was being rude for staring back at him or something.

Cause logic, you know?

Anyway, is there a proper and polite way to respond to a situation like that? What do you guys do? Why do you think people do that shit to begin with?! Just curious…

On to more important things: ITS THAT TIME OF THE MONTH, MOTHERFUCKERS! The first post in my Writing 101 class has gone up, and can be found here: https://buff.ly/2Wjlz0R

Do keep in mind that it’s not just for writing erotica, but for writing in any genre. And it’s interactive – I expect students to ask questions, and they can expect me to answer them ASAP. Don’t let my goofiness fool you – I know a LOT about this shit yo.

Hopefully I’ll see you there.

Anyway, back to work for me. I have a universe to destroy… 😉

Researchers at Queens University found even though straight women reported only being aroused by men, most women became aroused at every stimulus they saw — inclusive of men’s and women’s bodies, heterosexual and homosexual sex, and even animal sex.

FacebookTwitterPinterestRedditEmailWhatsAppSMS
Posted in Diary
← It’s been a while… 😳Creepy people… →