I am mentally and emotionally exhausted. More than that, I think I might be becoming a bit of a hermit. I have so many creative projects I’m working on, so many stories I’m writing/outlining, that I’m finding myself lost in them. It used to be I would turn to social media for a bit of fun, to talk to people and see what’s going on in the world, but anymore it seems more like a job, like a distraction from my writing that isn’t entirely welcome. No one seems to be really saying anything anymore, just regurgitating, especially when it comes to politics.

It seems the more I’m on social media, the more it reminds me of that movie Mean Girls.

I turned my social media notifications off a while ago just to distance myself from the constant pings (and to save my poor abused phone battery) and made the decision a few days ago to keep them off because the silence (and increased battery time) is so fucking nice. The only notifications I haven’t muted is Patreon. It’s like I have so much more free time now. Life is beautiful again. 😄

Free time I’m putting to good use. Currently I’m finishing up the second season of Voyeur, and somewhere along the way I ended up reminding myself why I started writing it to begin with. It’s an interesting mixture of drama, love, lust, and mystery that basically encapsulates everything I like to read in a book. And the characters all hold a special place in my heart, as I spent an inordinate amount of time and energy creating them. The only bad thing about the series is forcing myself to keep each episode under 20,000 words, because I keep bopping back and forth between characters and finding myself wanting to tell more of their stories… it’s kind of like a kinky soap opera to me. So much fun.

Another book proving to be fun is a little side project is Little Dead Girls, about Rachel, one of the main characters in another story I just finished, Devious Bitches, which so far only one person (the Patreon member that commissioned it) has read. Little Dead Girls examines Rachel’s past and explains a great deal about why she is the way she is. It also dives into some of the darker mythos of my Alexaverse and may end up being the bleakest story I’ve written yet. And that’s saying something. It will, however, have a happy ending if that sort of thing matters to you. It will just be a hell of a ride getting there.

In the grand scheme of my Alexaverse, Rachel is an incredibly minor character, but she caught the imagination of that Patreon so much that he commissioned yet another story about her – one that not only delved into her psyche a bit more but also exposed her past.

Things like this are why I became a writer to begin with.

I used to play Dungeons & Dragons for a bit, and one of the older advertisements for the Star Wars variant grabbed my imagination and never let it go. 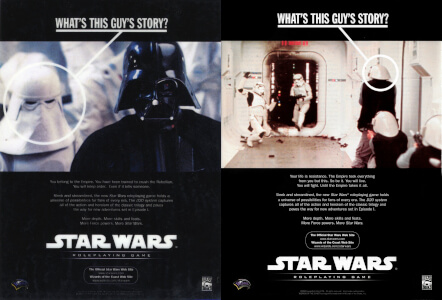 They captured my imagination. What was his story? Why was he there? What kind of person was he? My mind sort of zoomed out, thinking about all the characters in the movies. And not just Star Wars, but movies in general. And then comics. Novels. Some of the minor, blink-and-you’ll-miss-them characters suddenly took on a new light. What was their story? Why were they the way they were?

This was the catalyst of my becoming a writer, and while I love telling stories, it’s exploring the minds and motivations of my characters that truly holds my heart. It’s also why I love reading books and manga that do the same. People fascinate me.

And suddenly, as I write that line, it’s causing me to rethink my current view of social media. Maybe I need to look at it with a fresh pair of eyes, try to remember why I fell in love with it to begin with. Interact with the people I truly find interesting, and ignore/unfollow/block those I don’t.

Let’s see how this goes.

I may even get wild and crazy and up turning my notifications back on. Who knows?

“I’m always surprised when actors say they don’t like sex scenes. It’s like a freebie. It’s fun to make out with someone. So yes, thumbs up on that.”

FacebookTwitterPinterestRedditEmailWhatsAppSMS
Posted in Diary
← Making bricks with Mint 😭On being a rapist, and how my art imitates Life →