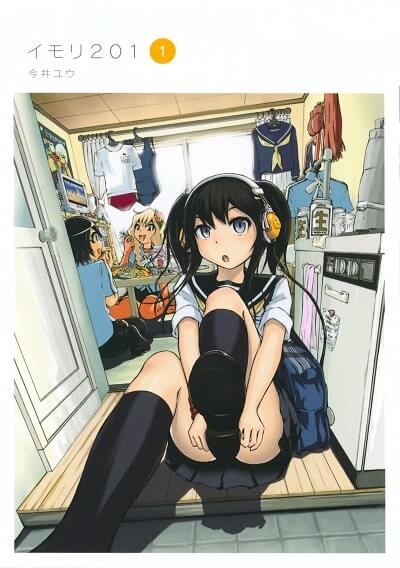 After failing his college entrance exams a second time, Kawashima is forced to move out of his home and into an apartment complex. No sooner has he moved in does the neighbour girl crash through his wall! Now his apartment is connected to hers, and it looks like his fantasy of meeting a cute high school girl has come true. However, there are some odd things about Imori. For example, she’s always wearing some form of school uniform, and she lives alone in her apartment. Is Imori really who she claims to be?

I usually only read completed manga (Goblin Slayer doesn’t count 😅), but the summary of “Imori 201” got me. The ending of this motherfucker reminded me why I don’t read an incomplete manga, however: it left off on a cliffhanger that the entire series had been building up to! Kind of like Prison School did (what the fuck happened to that series anyway?!).

This is not usually the kind of series I would read: mediocre artwork, a little too-childish, and only barely Ecchi. That being written… For some reason, I really liked the series! I swore I would quit reading after every issue, but something just kept pulling me back in. 😅 It’s just wacky enough to appeal to me, and maybe you too – just don’t judge this manga by its artwork.