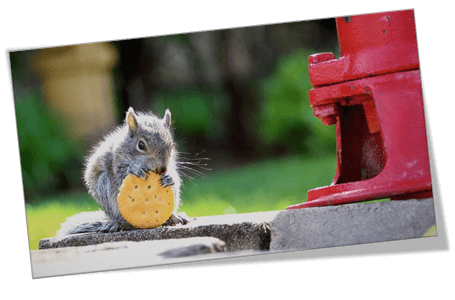 So I developed this habit recently that apparently unhinged my baby squirrel. It started by accident, and because around the people I hold dear, I’m goofy as all hell. I have this thing when it comes to her, see: my goal is to make her laugh at least once a day. Dead serious. I’ve been doing this forever, and it keeps my creative juices flowing and, you know, just makes things more fun in general. It definitely keeps things interesting, especially considering how we’re inside most of the day and together more often than not.

I ended up sliding a pack of crackers (saltines) underneath the door, the joke being she was in there so long she had to be getting hungry, but before I could utter the words, she hit me with, “Bitch don’t be getting salty with me!”

I lost it. Completely. Since then, whenever I’m feeling ultra bougie, I’ll toss that same pack of crackers (which I keep on top of her fridge) at her and throw my hands up in the air. She yells at me to quit being salty every time, and it still slays me.

I love being me. I love her. I love Life, in general, sometimes. 🥰

Except when I can’t seem to wrap up a story because I keep wanting to add things to it. Take my current project, Little Dead Girls, which I’ll be releasing to my Patreon and Subscribestar peeps in parts soon, but the rest of the world will get in a compiled form on January 1, 2024. I’m midway through revising it, see, at the point where I should basically be just fine-tuning things, tweaking events and speech, and maybe adding in a few bits and pieces to add flavor and context to the story. Instead, a thought occurred to me. Three of the four main characters weren’t really fleshed out the way I like, and trying to add in all the information in the main story just seemed like an insurmountable obstacle. You can only inject so much, you know?

It would be a lot easier to give them their own story. The problem with that is I just wanted to flush them out quite a bit but not write an entire story. I just wanted to explain to the reader why these people are the way they are without getting too out there with it, you know?

An idea came to me right before bedtime: write a short story for each, with each one being the star, and simply include them all in the main book. Each story would occur before the story proper and explain not only why these people are the way they are, but why they are best friends to boot – and add a bit more mystery to why they do the things they do.

These words will make more sense when you actually read the story.

Doing this means I have to draft up, brainstorm, outline, rough draft, and revise three different stories, and then get them to the point where they are ready to be included in the main story at the point I currently have it. In short: it’s going to make the entire project take much longer than I initially anticipated.

And you know what?

Being an independent writer without a publishing house to report to is a good thing because my agent would have retired long ago and checked themselves into a mental institution.

Guys aren’t the only ones who wrestle with the eternal debate of grower versus shower. According to Dr. Debby Herbenick at Kinsey Confidential, the sexuality information service of The Kinsey Institute for Research in Sex, Gender, and Reproduction, a woman’s vagina can almost double in length when she’s aroused — a process called vaginal tenting.

“During sexual excitement, muscular tension pulls the uterus upward, which has the effect of making the vagina both longer and wider. Now, instead of being 3-4 inches in length, a vagina may reach approximately 5-6 inches in length.” Dr. Herbenick notes that vaginal tenting may explain why a woman sometimes feels tighter to her partner during intercourse.