So I’m having an interesting conversation on Google +. Instead of going into detail, I’ll just paste it below. It started with the picture below… 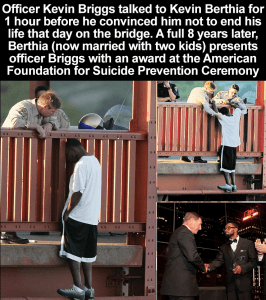 Sjay james: Wow …. He has a testimony

Tiffi Sea: This brings tears to my eyes.

Clara Mechau: Why can’t life have more of this & not more of the killings in Chicago & the countrywide mall fight break-outs😗

Fran MY: God is so awesome

jamie johnson: +Fran M god had nothing to do with it? humans are awesome!

Fran MY: +jamie johnson God has everything to do with it

Alexa Nichols: +Fran M Not trying to start a debate or argument (I am not an “internet gangsta”, and I talk to people online as I do in real life) but let me ask you a question: why, when someone does something good or when something good happens, does everyone automatically praise god – but not when bad things happen? If god is truly omniscient and omnipotent then he is responsible for Good and Bad, right? Or maybe I’m misunderstanding the whole religion thing…?

Fran MY: +Alexa Nichols yes your right and i won’t debate something even I can’t explain both he is in both

Ije Beja: everybody needs to be listen..

Noah Hewlett: +Alexa Nichols hi , not trying to debate either but after reading your comment…. for me I was told that even though bad things happens that humans don’t like … it happens for a reason. And most of the time it’s to make things better. It might not happen right away but it happens down the road. Some people realize it and some don’t.

Alexa Nichols: +Noah Hewlett I love your post. Seriously. And I understand completely what you’re saying. But I think it’s more a matter of perspective than fact – relativity. I’m not saying that’s a bad thing or anything, because it’s not. I mean, let’s face it, being positive and happy is the absolute best way to live your life…

Maybe I can give you an example of why I even wrote anything to begin with, and you’ll understand a bit better:

When I was a teenager, I taught myself how to program computers. I didn’t go to school for it, didn’t have a mentor, and back then the internet was still in its infancy so using it to learn was somewhat complicated. And costly (anyone else remember paying by the minute for internet usage??)

After long months of trial, error, and dissecting the programs of others, I became pretty efficient at it. I started making simple games, word processors, databases, etc.

When a friend heard about it, he asked me if I had thanked god for my gift yet.

I told him it wasn’t a “gift”, I worked hard to learn how to program, sacrificed a good chunk of my social life and time to be able to do what I do. Not to mention it was flat out hard, but I stuck with it.

He told me it had nothing to do with anything I did, it was god that deserved the glory.

And to this day I still disagree with him. We’re still friends, of course (strangely enough, most of my friends are Christian), but I simply flat out think he’s wrong.

People do amazing and heroic things all the time, and they should be given the credit they deserve – because they could have just as easily not done those things, and the world would be a much worse place as a result. We should encourage dignity, encourage honor, not say it wasn’t them but a supreme being instead. It’s almost like robbing them of their selfless act. Which is wrong.

That’s all I’m saying: give credit where credit is due. Period.

So far no one has posted anything else (I just checked) but what do you guys think? I really want to know!