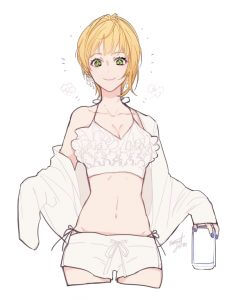 So, I got stupid-drunk last night and posted a short as fuck entry. I blame Anne. And I’m not even joking. See, since she spent the night, we decided to do an alcohol run. We picked up enough alcohol for the both of us and then promptly started drinking when we got back. And then she decided she was finished about halfway through, so she gave the rest to me.

And I had to drink it cause alcoholic. 😅

Luckily, I woke up this morning with zero hangover. Anne too. Unfortunately (for me) she used her abnormal energy and exuberance at this fact and tried to kill me. Homie-girl thought it would be funny to wake me up by getting about an inch in front of my face and just looking at me until I opened my eyes. I damn near jumped out of my skin when I saw her.

So, as punishment, she’s doing tomorrow’s entry. There’s no telling what to expect. She’s a strange, funny one. At one point during our gaming marathon (see below) she beat an incredibly hard boss, and I exclaimed: “You’re a beast!”. She instantly came back with “I know, right?!”

God, I love that girl, but I think she’s been hanging around me too much! 😀

And then somehow breaking said bath’s faucet when I tried to turn it off, something my brother did not see the humor in. The repair dude is in the bathroom right now fixing it. As a matter of fact, I should go check on him…

“Blake said that the body was the soul’s prison unless the five senses are fully developed and open. He considered the senses the ‘windows of the soul.’ When sex involves all the senses intensely, it can be like a mystical experience.”

FacebookTwitterPinterestRedditEmailWhatsAppSMS
Posted in Diary
← DrunkAnne’s post. Show her some love! →