Apparently, I need new panties. I was informed of this after Rebecca went through my intimates drawer (don’t ask – half the things she does leave me completely clueless) while I was putting up groceries from Wally World. She actually came into the kitchen holding several of my rattiest pairs – in front of my brother, I might add – and announced in a no-nonsense tone that we were going panty shopping this weekend because my panties were…what were the words she used…absolutely deplorable.

There was so much that threw me about that scene that I just kind of stood there and looked at her dumbly.

She’s not wrong, though. I mean, honestly, I’m not one of those girls that obsess over things like undergarments; I have a few sexy pair, but they are more for my partner than for me. I tend to buy underwear that’s simply comfortable, not flashy.
Apparently, this offends Rebecca. 😀

Of course, she comes from a rich family, and her childhood was very different than mine. Basically, she was used to having (more or less) the finer things in life, while I was kind of just lucky to have the things that I did.
Any one of her panties probably cost more than my entire collection!
When we do go underwear shopping this weekend, Rebecca is going to learn quickly that I’m not the kind of girl to spend $300 on a bra and panty set. That absolutely no one except for her will get to see.

On a side note: I’m seriously considering getting a dog. Like, an intimidating, chainsaw-teeth having killer type of dog. Like a miniature schnauzer! I’m falling in love with my besties, and I’ve been researching them online… 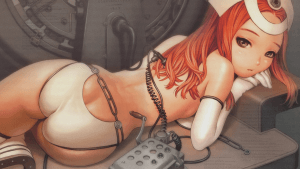