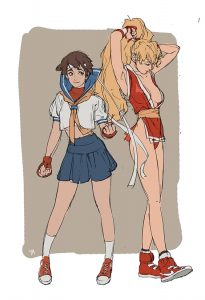 My entire day has been about two things: continually messaging lovey-dovey crap back and forth with the girlfriend unit (Rebecca) and the writing of Interview With A Werewolf. Anne was a tremendous help in this (the writing, not the messaging 😀 ), as she helped me brainstorm some weak plot points that were bothering me and causing me to pause writing entirely until I found a way to figure them out. It’s fun talking with someone about a story and watching their eyes light up as they come up with an angle or idea that you would have never in a million years considered. Anne’s excellent at that, and because of her so many of my stories were actually finished and not shelved for a later date.

As a result of her help, and the finger-breaking typing that occurred after as I listened to my playlist of music I built just for this story, I not only cranked out nearly 3,000 words but also ended up almost 75% finished with it. I had to rip myself away so I could wrap up other author tasks (unfortunately it’s not all about writing), the main one being almost finishing the paperback version of The Qedesha’s Handmaiden. People actually still enjoy – and buy – paperbacks, so the effort is more than worth it. Tomorrow it will be done for sure.

I plan on winding down my day by reading my latest manga, Hahri’s Lumpy Boardhouse, and playing a little bit of Skyrim. I’m starting to feel burn-out creeping up though, so next week I’ll most likely be picking a different game. Any suggestions?

Until tomorrow, I am…

“The Italians and Spanish, the Chinese and Vietnamese see food as part of a larger, more essential and pleasurable part of daily life. Not as an experience to be collected or bragged about – or as a ritual like filling up a car – but as something else that gives pleasure, like sex or music, or a good nap in the afternoon.”

FacebookTwitterPinterestRedditEmailWhatsAppSMS
Posted in Diary
← Getting thrown out of bedProductive Insomnia →